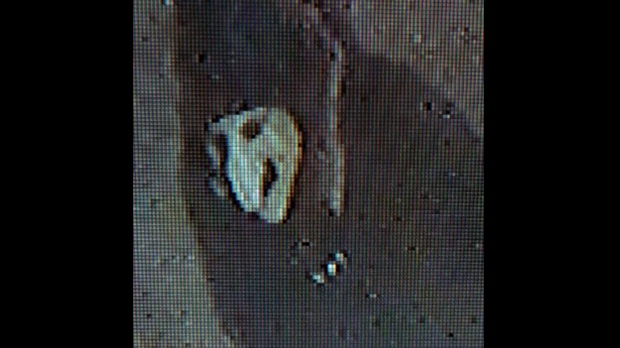 A masked suspect in a Nov. 1 shooting near Adelaide and Bathurst streets is seen in a surveillance camera image. (TPS)

Investigators have released surveillance camera images of two shooting suspects, one of whom was sporting a Halloween mask, after two men were shot during a botched robbery attempt in the downtown core.

Toronto police say that at about 4:41 a.m. on Thursday, two men were leaving a club in the Bathurst and Adelaide streets when two armed masked suspect approached them and demanded their belongings.

The two victims started to run away when the suspects opened fire on them, hitting one of them several times.

The victims showed up at a local hospital a short time later.

The first suspect is described as wearing all black clothing with a hood and a white Halloween mask “with a large nose.”

Images of both suspects were released to the public on Friday morning.

A suspect in a Nov. 1 shooting at Adelaide and Bathurst streets is seen in a surveillance camera image.