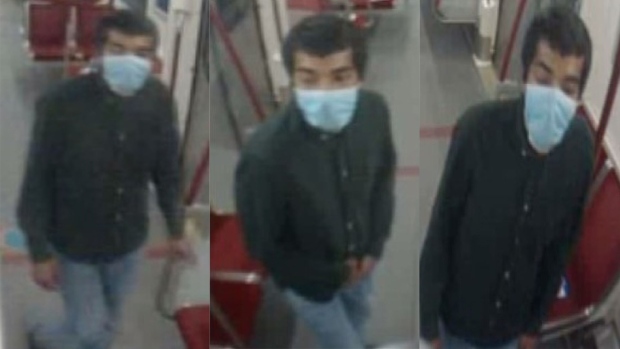 Police are searching for a suspect after a woman was sexually assaulted while on board a TTC subway train. (Toronto Police)

Police have released security camera images of a suspect wanted in connection with an alleged sexual assault on a TTC subway train.

On Sept. 27, a woman was on board a train on Line 1 heading north between Yorkdale and Wilson stations around 9:45 p.m. when a man approached her.

Police allege that the man sexually assaulted the woman.

She then pushed him away, police said, and yelled at the man to stay away.

The woman moved to the far end of the train before she exited.

The man is described as 24 to 30 years old, five-foot-nine to five-foot-11, with a light-skinned complexion, short dark hair with a slight wave and clean shaven.

Police said he was wearing black shoes or boots, light blue jeans, and a dark button-down shirt or jacket.

Anyone with information is asked to contact police at 416-808-3200 or Crime Stoppers anonymously.