Two men who were fatally shot in front of a Chinatown restaurant over the weekend had no gang ties and may have been targeted for something as benign as an “unintentional bump” or some choice words, police say.

David Michael Eminess, 26, Quinn Taylor, 29, and another man were in front of the New Ho King restaurant on Spadina Avenue near Nassau Street at around 3:15 a.m. on Sunday when they got into some sort of altercation with a suspect.

At that point, police say the suspect opened fire, killing Eminess and Taylor and injuring the man they were with as well as two bystanders who were in the area.

The three injured parties were all taken to hospital with non-life-threatening injuries.

Police have not yet released any description of the suspect and are continuing to review surveillance footage from area businesses in the hopes that it will provide a clue to the shooter’s identity.

“Gang members and people are carrying guns – high-capacity magazine guns, high-power guns – and they have a low threshold and it doesn’t take much for them to take it out and use it against some unsuspecting individual. The circumstances here I believe speak to that,” Staff Insp. Greg McLane told reporters at a press conference on Tuesday afternoon. “Based on what I know now I would say that is more likely than not that they (the victims) were just three guys out for an evening and something happened.”

Speaking with reporters at Toronto Police headquarters, McClane said that investigators are confident that Eminess and Taylor were targeted; however he said a precise motive remains unclear.

McLane also added that there is no proof Eminess, Taylor or the man they were with have any gang ties that would have prompted the suspect to open fire on them.

“There are many, many possibilities (for the motive) and one possibility would be that there was some altercation, words spoken, an unintentional bump and the shooter jumped from 0 to 1,000, pulled out his weapon and shot and killed these two young men,” he said.

The shooting occurred as a large number of people dined inside the New Ho King restaurant and a “great number” of others walked on both the east and west side of Spadina Avenue as the weather was mild, McLane said.

In addition, McLane said that there were a significant number of cabs in the area and that drivers may have been in a position to see the homicide or the events leading up to it.

As part of their investigation, police are urging anyone who may have been in the area at the time of the shooting or who may have had contact with the victims earlier in the evening to come forward.

“There are people out there that know what happened to these young men, why and I would even go as far as to say who is responsible,” McLane said. “We want to hear from those people.” 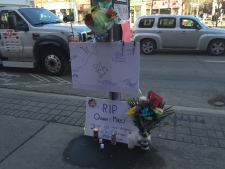