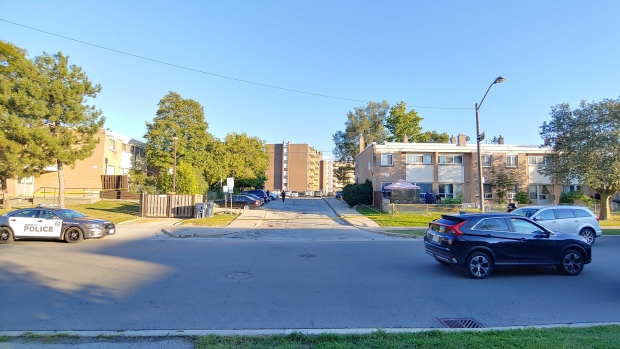 Toronto police are investigating a shooting in Etobicoke.

Police are searching for a 17-year-old boy wanted in connection with two Toronto shootings in August that left five people injured.

The first incident happened on Aug. 19 just after 6 p.m. in the area of Mount Olive Drive and Kipling Avenue.

According to police, at least six suspects arrived at a residential area, brandishing firearms.

The suspects allegedly opened fire on the residents who were outside.

Two people were hit by bullets. Both were transported to a local hospital with minor injuries.

Police said the suspects fled on foot and got into a white Mazda SUV and a silver Nissan sedan.

They were last seen travelling east on Mount Olive Drive.

More than an hour after that incident, police were called for another shooting near Shoreham Drive and Jane Street.

It is alleged that at least four armed suspects entered a residential community.

The suspects fled on foot, got into a white Mazda SUV and were last seen eastbound on Shoreham Drive.

On Friday, police said they have since obtained judicial authorization to identify a young person wanted in connection with the incident.

An arrest warrant was issued for the teen, who police allege was involved in both shootings.

“There are others involved in these shootings who have not yet been identified and these remain active investigations,” police said in a news release.

The same suspect is also alleged to be connected to a series of shootings in North York on Sept. 24.

Police released his photo and are appealing to the public for any information that may lead to his arrest.

He is believed to be armed and dangerous.

Anyone with information is asked to contact police at 416-808-7350 or Crime Stoppers anonymously.

Editor’s Note: The name and photo of the suspect mentioned above have been removed from this story as the judicial authorization allowing him to be identified expired on Oct. 13, 2020.