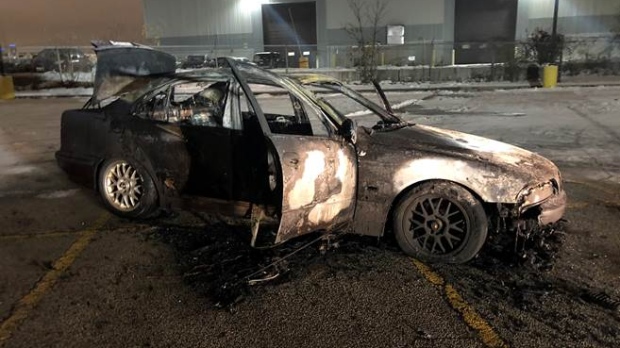 A burned-out vehicle is seen in this photograph provided by police. (Peel Regional Police/Twitter)

Peel police are looking for the driver of a vehicle that caught fire in a Mississauga parking lot after performing a stunt.

It happened near Wolfedale Road and Central Parkway West, near Burnhamthorpe Road.

Police said the driver was doing ‘donuts’ in the parking lot before it caught fire.

The driver attempted to flee the area while the vehicle was on fire, police said, but it did not get very far.

“If you were the driver of this newly burned out sedan, officers would like to speak to you,” police tweeted. “We have questions. Lots of them.”

Police are reminding motorists that consumer cars are meant to be driven on the roads and are not designed for stunts.

“We highly recommend you ‘donut’ try this.”

UPDATE:
- Consumer cars are designed to be driven on the roads and not to perform stunts.
- We highly recommend you ‘donut’ try this.
- Sorry. I couldn’t resist. pic.twitter.com/jUrdyOCJ8u