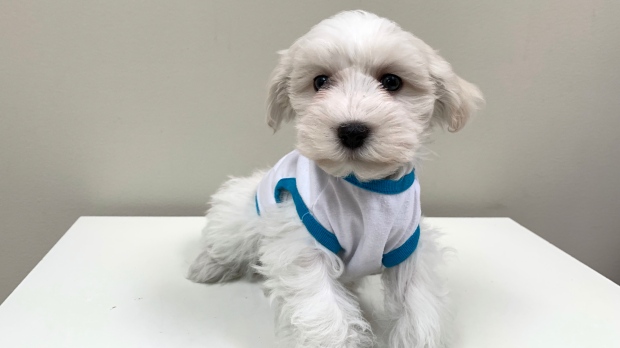 A white Maltese Poodle who was stolen in Mississauga is seen in this undated photo. (Handout)

Peel police are searching for two suspects wanted in the theft of a puppy in Mississauga on Wednesday.

Police said a victim who was selling a puppy met with two men near his home in the area of Lakeshore Road West and Lorne Park Road around 5 p.m.

As the victim was about to begin the transaction, one of the men brandished a black handgun and demanded the victim to give him the puppy, police said.

The victim complied and surrendered the dog to the suspects, who then fled the area.

Police said the victim was not physically injured.

One of the suspects is described as a Black male in his late teens to early twenties, five-foot-ten with a slim build. He was wearing green sweatpants and Balenciaga shoes.

Police believe he possessed the handgun.

The second suspect is described as a Black male also in his late teens to early twenties and stands approximately six feet. He was wearing a dark grey hooded sweatshirt.

Meanwhile, the puppy is described as a male Maltese Poodle, white, and approximately nine weeks old.

Anyone with information about the suspects or the location of the puppy is asked to contact police or Crime Stoppers anonymously.

Police want to remind those who are attempting to sell items using an online marketplace to use one of their Buy and Sell Zones as a meeting place.