Police seize $1.7M worth of cannabis 'candy' in Vaughan and Toronto 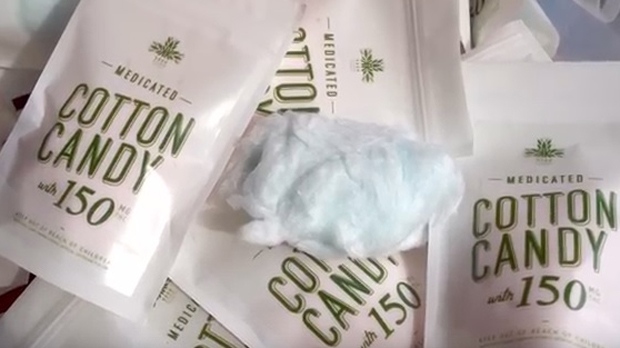 "Medicated" cotton candy is shown in a screen grab from a YRP video.

Police in York Region are warning of cannabis-edibles with little or no labelling to indicate they are anything more than simple candy after seizing $1.7M worth of illegal product.

Starting on Feb. 28, York Regional Police say they witnessed a “suspicious transaction” at a commercial building in the Keele Street and Steeles Avenue West area.

They moved to detain a suspect and allegedly found 400 grams of cannabis flower, $6,000 in cash and documents related to a dispensary on Baldwin Street in Kensington Market.

Police later conducted searches at a commercial property in Vaughan and at the Baldwin Street dispensary and allegedly seized cannabis products including “gummy bears, chocolate bars, lollipops and cotton candy.”

Investigators said the products “look no different in appearance than similar products made and marketed to children.”

Video footage of the seized products was released by police on Friday.

A 42-year-old Vaughan man, identified as Emil Mikhailov, was charged with offences under the Cannabis Act.

Cannabis edibles of all kinds remain illegal in Canada.

Cannabis laced "Qandy" is shown in a screen grab from a YRP video.