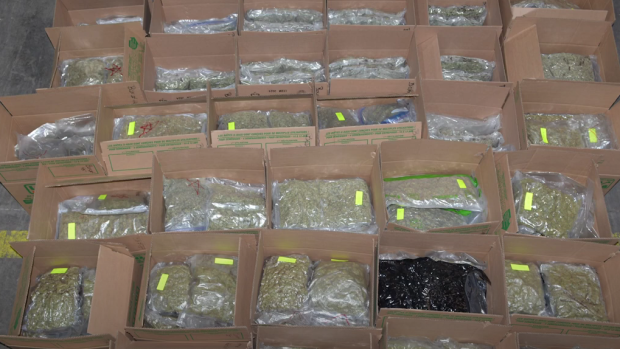 A quantity of drugs seized as part of a months-long investigation dubbed 'Project Gateway' are shown. (Niagara Regional Police Service)

A months-long investigation into an organized group that was allegedly involved in a host of criminal enterprises has led to the arrest of 20 people and the seizure of tens of millions of dollars worth of drugs, police say.

The investigation, dubbed "Project Gateway,” began in the fall of 2021 and involved officers from Peel Regional Police, Niagara Regional Police and the Hamilton-Niagara Detachment of the Royal Canadian Mounted Police.

In a news release issued on Thursday, police said that through the course of the probe investigators were able to link the group to a host of illegal activity, including smuggling drugs from Mexico and Los Angeles into Canada by transport truck, producing cannabis on a “massive scale,” smuggling people into New York State by boat and employing illegal foreign workers to work at cannabis production sites and to clean chain hotels.

Police say that a number of seizures were made as part of the investigation. One of those seizures saw police recover 45,000 cannabis plants and 20,000 lbs of processed cannabis. The street value of those drugs is estimated at more than $62 million.

Another seizure saw the recovery of a shipment of cannabis that was allegedly destined for Europe. It had a street value of approximately $1.3 million.

Niagara police say that the joint investigation came to a conclusion on Sept. 14 with the execution of a series of search warrants throughout Ontario. The authorities say that 175 police officers from agencies across Southern Ontario and 10 Canada Border Services Agency officers participated in the execution of search warrants in Brampton, Milton, Niagara Falls, Thorold, Etobicoke, Mississauga, Woodbridge, Richmond Hill and Hamilton.

“The cooperation that we have seen throughout this project has been nothing short of remarkable,” Staff Sgt. Matt Hodges, from the Niagara Regional Police Service, said in a video posted to YouTube. “Police agencies from across the province really came together at different stages to react to the flow of evidence and our investigative steps. Without their assistance and cooperation there is no way this project would have even been as close to as successful as I think it was.”

Police say that a quantity of drugs were seized during the execution of search warrants on Sept. 14, as well as three handguns, two shotguns, a rifle, 1,650 rounds of ammunition, six stolen vehicles and $467,000 in cash.

The 20 individuals taken into custody are facing more than 120 charges combined.

“Our goal at the beginning of this was to dismantle and disrupt this organized group and put an end to the behaviour and the scheming that was happening that ultimately leads to violence in our communities, not just here in Niagara but in all the other jurisdictions,” Hodges said. “I think that this project is going to have a profound impact all across the country.”

For a full list of the suspects taken into custody and the charges they are facing follow this link.