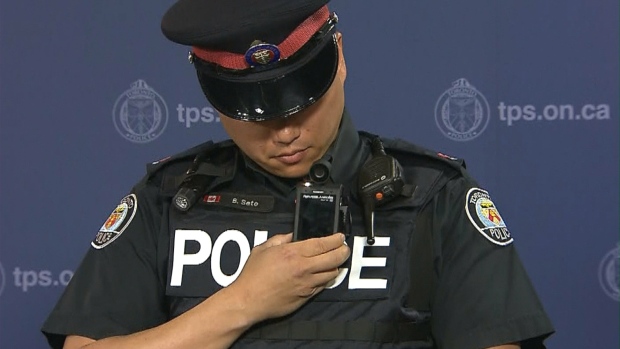 Toronto police are hoping those who’ve come into contact with officers wearing body-mounted cameras as part of a pilot project will provide police with their feedback in the form of a written questionnaire.

Toronto police Community Safety Command says that between now and March 2016, it will randomly mail out single-page surveys and return envelopes to members of the public who have interacted with officers wearing the cameras since they were introduced in May.

About 100 officers from the Toronto Anti-Violence Intervention Strategy, 43 Division, 55 Division and traffic services have been equipped with three different models of body-worn cameras.

The pilot project is meant to see whether the cameras and their recordings can provide a neutral account of interactions between officers and members of the public.

Equipping 100 officers with the cameras and conducting a review of their performance will cost the service about $500,000.

Under the current rules of the pilot, officers are to switch the cameras on whenever they are engaged in a call for service or an investigation. Officers must always inform members of the public when the cameras are rolling.

Members of the public are able to request copies of footage recorded by filing a Freedom of Information Act request.

Video footage collected by the cameras is encrypted and uploaded to servers at Toronto Police Headquarters.

The pilot project will wrap up in March 2016.