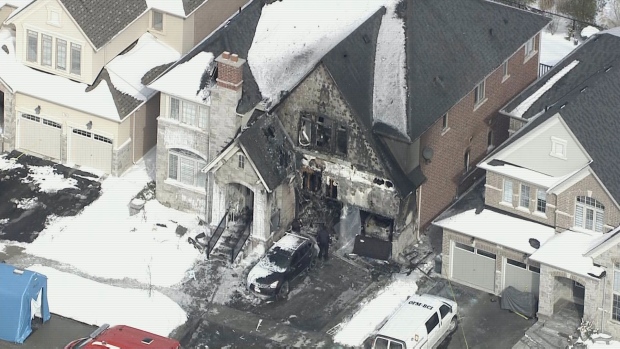 Police are looking to speak with the driver of a vehicle that was seen in the vicinity of a suspicious house fire in Georgetown last week.

Halton police have said that 56-year-old Krystyna (Emilia) Rerak and her husband, 56-year-old Andrzej (Andrew) Rerak, were both found deceased following the blaze at their home on Hidden Lake Trail in the early hours of Feb. 17.

Police have said that they believe the circumstances surrounding their death are suspicious, though few other details have been released so far.

Surveillance footage obtained by CP24 last week did appear to show an unknown individual sneaking into the open garage of the home hours prior to the fire, just after a vehicle had pulled in.

It was not clear from that video whether the occupants of the vehicle saw that individual prior to the garage door closing behind them.

In a news release issued on Friday, police said that investigators want to speak with the occupant o a newer model, white, mid-sized SUV that was observed in the area of Orchid Avenue, Robinson Road and Danby Road in Goergetown between 4:30 a.m. and 6 a.m. on Feb. 17.

“The vehicle may have driven past responding emergency vehicles while in the area,” police said in the release.