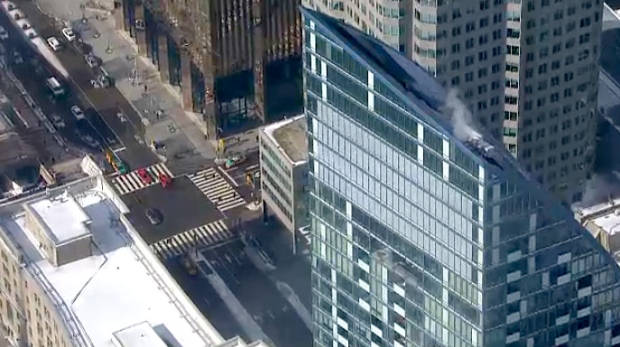 Ice loosened by sustained sunlight on the tips of downtown Toronto’s tallest buildings is falling and police are asking motorists and pedestrians to be alert.

Reports from Toronto police and transit agency Metrolinx indicate ice has fallen from areas around the CN Tower, Union Station and the Bay Street area through the Financial District.

Bay Street was closed in both directions for several hours between Wellington and Harbour streets due to the ice but has since reopened.

Police are asking motorists to pull over or turn around if they encounter falling ice, while pedestrians in the core can retreat to the underground path system.

PUBLIC ALERT
- Police responding to reports of ice falling from construction cranes, buildings & other tall structures.
- Drivers asked to be mentally prepared of the possibility, & to pull to safety if struck.
- Pedestrians asked to be aware, take @TorontoPATH if possible.
^vk

Ice falling off top of condo at Harbour and York @AnwarKnight pic.twitter.com/TIGrKYdtRP