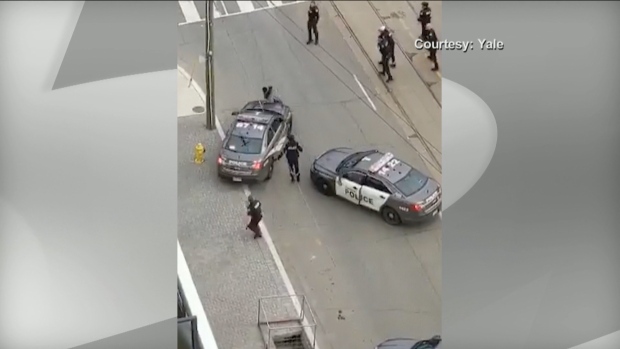 A viewer video shows a suspect being chased by Toronto police downtown on Sunday, April 12, 2020.

Ontario’s police watchdog has cleared an officer who intentionally drove into a knife-wilding suspect in Toronto’s downtown core last spring, causing him to sustain a fractured wrist and foot.

Police were initially called to a store in the area of King and Bathurst streets for reports of a robbery at around 6:10 p.m. on April 12, 2020.

When they arrived on scene they immediately located the suspect in the area and directed him to drop the large knife he was holding.

The suspect refused to comply and proceeded to walk southbound along Bathurst Street.

In his report, SIU Director Joseph Martino says that a number of officers pursued the suspect. He said that a total of seven different officers discharged conducted energy weapons in an unsuccessful attempt to get him to stop.

However, Martino said that the suspect’s winter jacket “appears to have prevented the probes that were on target from penetrating through to his skin.”

Martino said that another officer then intentionally bumped the suspect with his vehicle on three separate occasions but each time the suspect only stumbled and was able to regain his footing with “the knife still in his right hand.”

The incident finally came to an end after the suspect turned onto Front Street and started walking eastbound.

That is when an officer who had just fired his conducted energy weapon at the suspect twice hopped back into their cruiser and started to follow him at a slow rate of speed.

Martino says that the officer then used the driver’s side front corner of his cruiser to strike the suspect from behind, causing him to land on the street. The front wheel of the vehicle then drove over the suspect before the officer was able to stop. 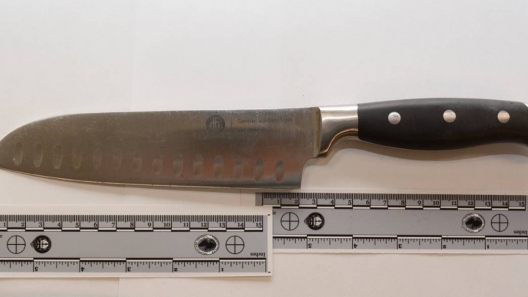 In his report, Martino said that there are no “reasonable grounds” to believe that the officer committed a criminal offence in deliberately running over the suspect, particularly in light of the repeated attempts that were made to place the suspect into custody using less lethal methods.

Martino did interview the subject officer as part of his investigation and said in the report that the officer told him that he believed the suspect “represented a real and present danger to the health and safety of the public at the time.”

He said that responding officers did seem to appreciate that the suspect was “mentally unwell” either due to intoxication or acute mental distress and “did what they could to contain” him by “ushering pedestrians away from the scene and attempting to deal with him from a distance.”

But he said the use of pepper spray and Conducted Energy Weapons to stop the suspect had not worked and there was “little prospect” that continuing to resort to those weapons “would be any more effective.”

He also said that the subject officer, “cognizant of the risk of serious injury” said that he chose to lower his speed to approximately 10 km/h as he made contact with the suspect.

“On this record, I am satisfied on reasonable grounds that the subject officer’s use of his cruiser was commensurate with the exigencies at hand,” Martino concluded.