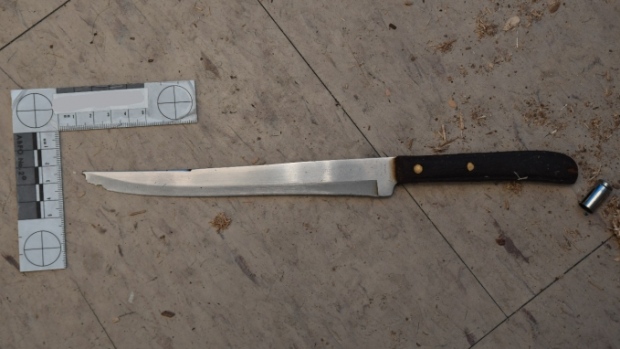 One of the weapons that was possessed by 46-year-old Gedi Ali Gedi on the morning that he was fatally shot by police in his apartment is shown. (Special Investigations Unit)

Ontario’s police watchdog has cleared two cops who fatally shot a knife-wielding man in a downtown apartment building while investigating the disappearance of a woman whose remains were later found scattered across several locations.

Amanda Killeen, a 32-year-old single mother, was seen on camera entering the building at 291 George Street on Feb. 19, 2021 but was never seen leaving the property.

The search for Killen began as a missing persons investigation but it later turned into a homicide investigation “when further video evidence was discovered,” SIU Director Joseph Martino said in his report.

Then in the early morning hours of Feb. 23 police decided to forcibly enter two apartments inside the George Street building while they awaited search warrants.

One of the apartments belonged to 46-year-old Gedi Ali Gedi, who was formerly in a relationship with Killeen.

In his report, Martino said that members of the Emergency Task Force used a battering ram to breach Gedi’s door and were “immediately confronted” by Gedi running at them while clutching a knife in his right hand a cleaver in his left hand.

He said that Gedi was instructed to “stop and show his hands” just before two of the officers opened fire.

He ultimately sustained a single gunshot wound to his chest as a result. He was taken to hospital but succumbed to his injuries later that day.

“There is little doubt that Mr. Gedi constituted an imminent threat of grievous bodily harm or death to Subject Officer #1 and Subject Officer #2 and that the officers responded reasonably to preserve themselves when they shot at Mr. Gedi,” Martino said in his report clearing the two officers of criminal wrongdoing. “Mr. Gedi was armed with potentially lethal weapons in both hands – a cleaver with a blade measuring 20 centimetres by 8 centimetres, and a knife with a blade about 17 centimetres long. He was also intent on doing harm to the officers. On display on a television inside the residence was a live feed from a lobby camera. Accordingly, the evidence strongly suggests that Mr. Gedi knew what was coming and had armed himself to attack the officers.”

In the days following Killeen’s disappearance, human remains were discovered at several locations around Toronto, including at one of the city’s transfer stations.

Martino said in his report that the officers would have known at the time that Gedi “was tied to a recent murder, and was willing and able to resort to extreme violence.”

For that reason, he concluded that they had a very legitimate reason to fear for their lives.

“In the circumstances, faced with an armed individual running in their direction from no more than a few metres away, I am unable to reasonably conclude that either of Subject Officer #1 and Subject Officer #2 acted with excessive force in meeting the lethal threat presented by Mr. Gedi with lethal threat of their own,” he said.