Poll: More than half want Ford ousted if found guilty 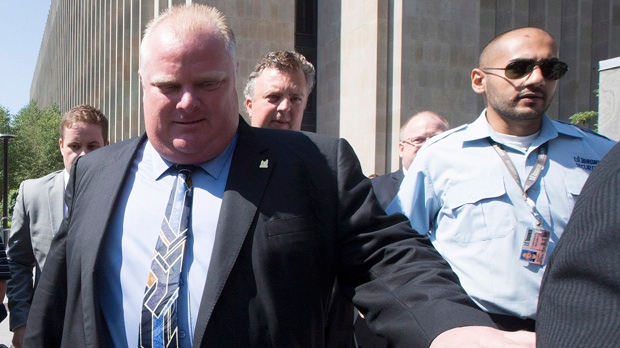 Mayor Rob Ford walks out of court in Toronto on Wednesday, Sept. 5, 2012. (The Canadian Press/Michelle Siu)

More than half of Torontonians think Mayor Rob Ford should be tossed out of office if he is convicted at his conflict-of-interest trial, a new Forum Research poll suggests.

Conducted after Ford testified at the trial last week, 55 per cent of respondents agreed the mayor should lose his job if he is found guilty of ethical misconduct.

The sentiment was strongest among respondents (66 per cent) with household incomes exceeding $100,000 a year. Meanwhile, 68 per cent of people aged 18 to 34 want Ford to be ousted if convicted.

Fourteen per cent of his own supporters think he should lose his job if found guilty, the poll found.

Lawyers wrapped up their arguments in Ford’s three-day trial last week, leaving the decision in the hands of a judge.

Ford is accused of not declaring a conflict of interest when he gave a speech and participated in a council vote last February to strike down a recommendation that he repay donations he solicited using official city letterhead for his private football foundation.

In his testimony, Ford told court he believed he did nothing wrong based on his own definition of conflict of interest laws.

If he is found guilty, Ford could be ousted and barred from running for city council for seven years.

The lawsuit was launched by Toronto resident Paul Magder.

The poll suggests 42 per cent of people approve of the job Ford is doing as mayor, up one point from August but down from 60 per cent in February 2011.

His biggest supporters are people aged 65 or older (55 per cent), drivers (53 per cent) and those living outside the former city of Toronto or East York.

Ford’s approval rating was lowest among those whose annual household incomes exceed $100,000 (29 per cent.)

Respondents were also asked to give their opinions on a pair of “what-if” election scenarios.

In a one-on-one mayoral race between Ford and former Ontario Attorney General Michael Bryant, both contestants would emerge with 40 per cent of the vote, the poll suggests.

In a race against former mayoral candidate George Smitherman, Ford would lose handily 37 per cent to 46 per cent, Forum Research said.

The poll was conducted Friday and Saturday by an interactive voice response system among a randomly selected sample of 834 Torontonians who are 18 years of age and older, Forum Research said.

Results are considered accurate to within 3 per cent, 19 times out of 20, although subsample results will be less accurate.