Two popular fitness chains are asking residents of Ontario’s COVID-19 hotspots not to travel to other jurisdictions for a workout following the closure of fitness facilities in Toronto, Peel Region, and Ottawa.

On Saturday, the provincial government moved the three regions into a modified version of Stage 2, closing indoor dining rooms, movie theatres, and gyms for the next 28 days.

Over the past few days, residents of GTA municipalities not currently under additional restrictions say they have seen a surge in traffic at local gyms from people who are travelling from outside the area.

Earlier this week, a video posted on Twitter showed a line of people wrapped around an LA Fitness location in Milton and one guest, who had travelled from Brampton, told CTV News Toronto that they didn’t see any issue crossing over into another region.

“I think if you follow all the guidelines, wear a mask, it shouldn't be too bad,” he said. 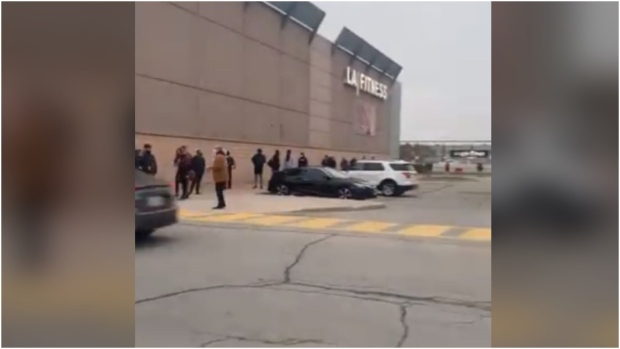 LA Fitness has now issued a notice to members, urging people from the three regions not to travel to other gyms to workout.

“To be clear, if you reside in a ‘hot spot’ region, we must ask that you not travel to visit LA Fitness clubs in regions outside your own during the temporary closure. Let’s all work together to promote health and safety during this public health crisis,” the statement read.

“LA Fitness has already frozen the membership status for all members located in these higher transmission areas. This means you will not be billed during the time of this closure, your membership is inactive and you should not be using LA Fitness clubs.”

Staff at an LA Fitness location in Vaughan told CP24 that employees are checking ID at the door and turning people away who aren’t from York Region.

One guest told CP24 early Thursday morning that he has seen lineups outside the Vaughan location all week.

"When I came here last night, they said they came up with another rule that only people that signed up here can actually go to this gym," he said.

Meanwhile, Goodlife Fitness said it is also asking all of its members not to travel to other regions of the province to work out and has actually amended its fitness time booking system to prevent those in COVID-19 hotspots from doing so.

"All Members in these regions were automatically placed on freeze on Saturday, October 10, and they are not permitted to book workouts at Clubs in surrounding regions using the GoodLife App or Member Portal," the company told CP24 on Thursday.

Additional restrictions could be coming for gyms

On Wednesday, Dr. Barbara Yaffe, Ontario’s associate chief medical officer of health, said the province is currently reviewing restrictions surrounding gyms in the wake of a recent outbreak at a spin studio in Hamilton.

Officials confirm that 69 COVID-19 cases have been linked to a SPINCO location on James Street.

“When it first came to my attention … I made recommendations that the public health measures team reconsider the guidelines for spin cycle places and other kinds of gyms,” Dr. Barbara Yaffe told reporters on Wednesday afternoon.

“Because… even though they follow guidelines there was obviously significant transmission so I think we do need to review the guidelines, and that's in process.”

Speaking to reporters at a news conference on Thursday, Premier Doug Ford urged people in Toronto, Peel Region, and Ottawa not to travel to gyms or other facilities outside their area.

Ontario Health Minister Christine Elliott warned that this type of behaviour could lead to further transmission of the virus.

"Please stay within your  own region, please work out at home. Please obey the rules and regulations affecting your home region so that we don't end up with problems in other regions in Ontario," she said Thursday.

"What we really want to do is bend this curve, get these numbers back down again and if we have people travelling around outside their home area to get some of these services, that is only going to add to our numbers and add to the problem."

-With files from Phil Tsekouras and Miriam Katawazi