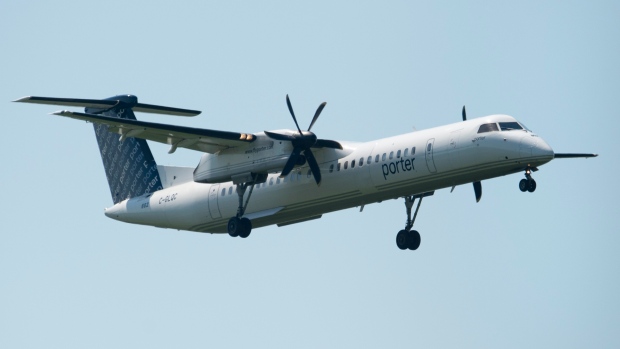 An Porter airlines flight makes its final approach as it lands at the airport Tuesday July 2, 2019 in Ottawa. Porter Airlines is extending its suspension of all of its flights by another month until July 29. THE CANADIAN PRESS/Adrian Wyld

Porter Airlines will be extending its flight suspension until mid-November due to the continued COVID-19 travel restrictions in place.

The airline, which is headquartered at Billy Bishop Airport in Toronto, temporarily halted operations in March as the country closed its borders to discretionary travel in order to curb the spread of the novel coronavirus.

Flights were originally slated to resume on June 1 but have since been pushed back multiple times.

In a statement released on Tuesday, the airline said “the ongoing uncertainty presented by government travel restrictions” is still impacting their ability to operate flights.

“We want to see our planes in the sky as soon as possible and are actively working to prepare for our resumption of service,” the statement reads.

“We are closely watching developments and know that Porter will be an important part of providing people with travel options as the economy recovers.”

The new “return to service date” for Porter Airlines is Nov. 12.

Due to ongoing government travel restrictions, we are modifying our return-to-service date to Nov. 12. To read more visit: https://t.co/hcIz1TH85Q

In August, Porter said that its flights to Muskoka, Ont. and Stephenville, N.L. have now been cancelled for the rest of the year.

The airline is waiving change and cancellation fees on all fares booked until November 12.

The Canada-U.S. border was closed to non-essential travel in March and has been extended each month. It is now expected to be closed until at least Sept. 21.