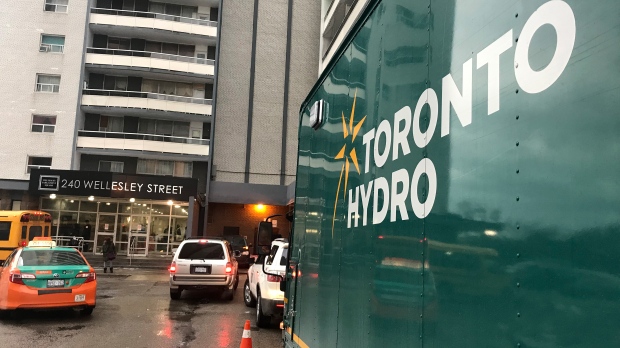 Toronto Hydro on scene of a Wellesley Street East building on Feb. 21, 2019 where an inspection on the electrical system is being conducted.

Power is being restored to residents of a St. James Town high-rise after a proactive inspection was conducted in the wake of a series of electrical issues at three buildings owned by the same landlord.

The inspection, which cut the power at 9 a.m. Thursday, at 240 Wellesley Street was carried out by the Electrical Safety Authority in coordination with Toronto Fire Services.

It was part of a city-wide “inspection blitz” that was announced last week by Mayor John Tory in light of separate incidents at three other St. James Town buildings.

In August an electrical fire at a high-rise at 650 Parliament Street displaced 1,500 residents and in January about 1,000 tenants of an of an apartment building at 260 Wellesley Street East were left without power and heat for more than 72 hours after a pipe burst and caused damage to the building’s electrical room.

Residents of another building at 280 Wellesley Street were also left without power for several days earlier this month after a after a fault was found during a planned inspection of the building’s electrical system.

Danny Roth, a spokesperson for building management, told CP24 on Thursday that the inspection at 240 Wellesley was being carried out on a proactive basis after a previous inspection uncovered issues that would not have been discovered during regular maintenance.

He described the inspection as a “deep dive” that will hopefully prevent future issues, similar to the ones that occurred at the other St. James Town buildings.

One woman who moved to 240 Wellesley Street after being displaced by the fire at 650 Wellesley Street in August told CP24 on Thursday morning that despite the challenges associated with the outage she is glad building management is being proactive.

According to a release issued by the city, a third-party company was hired by the building owner to provide bottled water, hot beverages, snacks and assistance to residents throughout the outage.