Power returns to thousands of T.O. customers after more than 30 hours

Power has finally started to return for thousands of residents at about 20 apartment buildings in the Thorncliffe Park area more than 30 hours after they lost electricity and heat.

The power outage near Don Mills Road and Eglinton Avenue East in Thorncliffe Park began Friday at about 3 p.m.

“Crews continue their work to restore 3 remaining buildings at southeast end of Thorncliffe,” Toronto Hydro said on their Twitter account around 10:15 p.m. Saturday.

The utility said in the tweet “most power” has been restored. A spokesperson said power at the last three buildings would likely be restored by around 1:30 a.m. Sunday.

Initially, crews were hoping to restore power by late Saturday afternoon. The target was then pushed back to the dinner hour.

Toronto Hydro spokeswoman Tanya Bruckmueller said the power would be restored to the buildings, located on Thorncliffe Park Drive, Grandstand Place and Milepost Road, on Saturday night once crews replace faulty switchgear equipment that is more than 20 years old.

Bruckmueller said the faulty switchgear is located in an underground hydro vault in front of 27 Thorncliffe Park Dr.

Crews had to ground the circuits to create a safe work environment within the vault before they could enter and replace the equipment, Bruckmueller told CP24.

Ted Bradley, a resident of one of the buildings affected by the outage, said the experience was miserable and boring.

Overnight, the temperature dropped to -3 C.

Bradley, a pensioner on a fixed income, said he bought perishable groceries shortly before the power went out, and he’s worried he will be forced to throw them out.

“If that goes bad, I don’t eat for the rest of the month,” Bradley said. “I can’t understand why it takes them 18 hours, more than that now, to fix a switch, is what they said it is."

Toronto Hydro said residents can apply for compensation to cover things such as spoiled food or hotel stays.

David, another resident, said tenants were upset because they didn’t receive frequent updates about the restoration efforts.

Those without powered-up smartphones were unable to access updates online, so someone should have visited the buildings to share the information with residents, he said.

“What we’re asking for as tenants … is to simply get regular updates as to when the power is going to be coming back online,” David told CP24.

Parker said the Thorncliffe Park equipment failure is one of several to occur across the city in recent months, and people can expect more power outages due to the aging state of hydro infrastructure in Toronto.

Toronto Hydro is aware of the situation and is applying to the Ontario Energy Board for capital funding for upgrades, Parker told CP24.

“The challenge we face is that throughout the city we have infrastructure that is beginning to show its age at the very time when demands on our systems are increasing, both because of rising population and because more and more people are plugging in more and more things,” Parker said.

With files from CP24 reporters Jackie Crandles and Cristina Tenaglia. 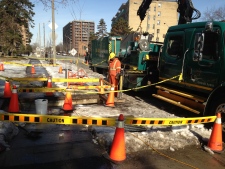 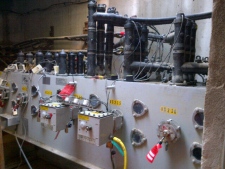 A piece of faulty switchgear equipment is pictured in an underground hydro vault on Thorncliffe Park Drive in this photo provided by Toronto Hydro on Saturday, March 9, 2013. (@TorontoHydro/Twitter)