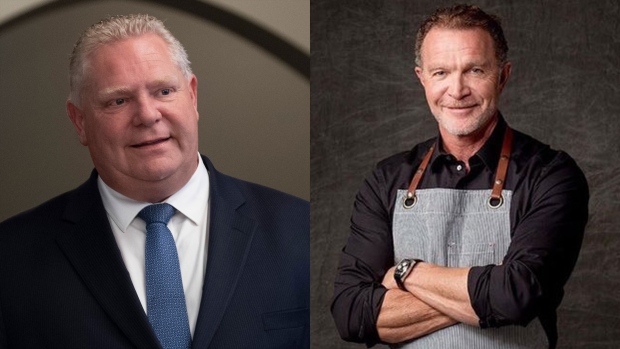 Doug Ford (left) and Mark McEwan (right) are seen in this composite image. (The Canadian Press and Twitter)

Premier Doug Ford is standing behind his government’s decision to order the suspension of indoor dining at bars and restaurants in Ontario’s COVID-19 hot spots despite criticism from one celebrity chef who is accusing him of “driving our economy into a wall.”

Mark McEwan, who is a TV personality and the owner of several high-end Toronto restaurants, took to Twitter on Thursday to express his frustration with the modified Stage 2 restrictions in Toronto, Peel, York and Ottawa.

Responding to a CTV News Toronto article, he urged Ford to “lead Ontario back to work safely” and said that further shutdowns are a “mistake.”

“Do the right thing and lead the economy back,” he wrote. “BOLD LEADERSHIP…Be brave Doug Ford.”

Asked about the comments during his daily briefing on Friday, Ford said that he has a “great deal of respect” for McEwan but would rather take his advice from epidemiologists and public health experts.

“I have to listen to the healthcare professionals and we see the numbers going up and we are concerned about that,” he said. “We are over 800 cases today and we are down to five regions in the entire province that don’t have any cases and that is telling me this spreading right across the province, which is concerning. So I respect what he (McEwan) is saying but we have to focus on the health and safety of everyone across the province.”

Ford told reporters on Friday that “absolutely despises” having to order the closure of businesses but he said that “we won’t even have an economy if this thing (COVID-19) continues to spread.”

His comments came hours after another restaurateur spoke with CP24 about the challenges he is facing in keeping his business afloat amid the pandemic.

Paramount Fine Foods CEO Mohamad Fakih said that he respects the Ford government’s decision to order the suspension of indoor dining at bars and restaurants in COVID-19 hot spots but finds it “ridiculous and irresponsible” that weeks later supports are still not in place for businesses like his.

He said that while the Ford government has promised $300 million to help shuttered restaurants cover fixed costs, he has not seen any details about that program or “any money” from it.

In the meantime, he said that he has already had to cover one month’s rent at his dozens of restaurants and is now trying to figure out how he will come up with enough money to cover November’s rent amid a significant drop in revenue.

“So small businesses, like my franchisees, I don’t think will make it 60 days because we are paying rent for two months, full rent, 100 per cent, taxes, expenses," he said. “The provincial and federal governments need to get this right. This is the second time around. There is no way that several levels of government should not be able to figure out subsidies for the most hard-hit business sector in Canada in eight months.”

The Canada Emergency Commercial Rent Assistance program was introduced in the spring to help lower costs for small businesses during the pandemic but it was widely criticized for putting the onus on landlords to sign up and eventually expired at the start of October.

Two weeks ago the Liberal government announced a new rent subsidy program that will provide $2.2 billion in direct support to commercial tenants but the money has not yet started flowing, leaving Fakih and other entrepreneurs like him scrambling to find ways to cover their bills.

“The idea that it is OK to shut down the economy without having thought through what we need to save jobs and businesses is quite frankly ridiculous and irresponsible and it is very negative for the economy in general,” Fakih told CP24. “These restaurants have lasted eight months and that means they are worth saving. We don’t want a handout; we want a hand up.”

Major restaurant chain says it may not survive past February

Ford has repeatedly said that moving some regions of the province back into a modified version of Stage 2 was the hardest decision he has had to make as premier and was not one he took lightly.

He has, however, said that it was necessary given the surging number of COVID-19 infections in some parts of the province.

In an interview with CP24 earlier on Friday, the president of the SIR Corp chain of restaurants that includes Jack Astor’s Bar and Grill and Scaddabush Italian Kitchen & Bar said that the pandemic has hit his business hard, along with most others in the industry.

He said that prior to March, SIR Corp employed 4,800 people but that number dropped to 800 due to widespread closure orders in the spring. It then increased to 2,800 this summer but has dropped down to 1,900 again as more jurisdictions order the suspension of indoor dining.

“I can only hope that this gets reassessed and people realize that we have spent hundreds of thousands of dollars to ensure our guests’ safety and restaurants are not the cause of the spread of COVID-19,” Paul Bogner said. “If it doesn’t we are going to struggle to make it through February. If we don’t get support from both levels of government I will tell you that our business will be at risk by February under the current conditions.”

Toronto Public Health has previously said that about 44 per cent of COVID-19 outbreaks in Toronto were tied to bars and restaurant during a one-week period last month, prompting Medical Officer of Health Dr. Eileen de Villa to plea with the province to impose tougher restrictions.

But in Peel Region, Medical Officer of Health Dr. Lawrence Loh has said that he is not aware of any outbreaks that have been traced back to bars and restaurants.

“If we were hearing stuff, if we were seeing a massive exposure or outbreak in a restaurant I would point to that but as I have said we have a very different community,” he told reporters earlier this week, noting that Peel doesn’t have the same “nightlife” as Toronto.

For his part, Fakih said that he always understood that there might be a need to “shut down parts of the economy again in areas that cases are rising” but he expressed frustration with what he perceives as a lack of support from government.

He said that needs to change now in order to save businesses and jobs.

“We are now starting to make decisions to lay off more people and more people because the different levels of government haven’t been able to coordinate the subsidy,” he said.