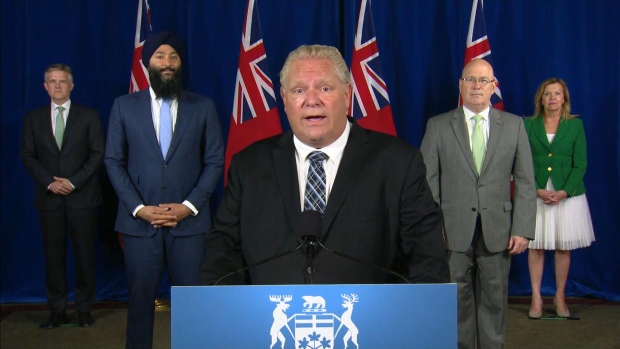 Premier Doug Ford speaks to reporters to provide an update on the province's COVID-19 response on July 8.

TORONTO - Ontario Premier Doug Ford vowed Wednesday to make air conditioning mandatory in the province's long-term care homes, though critics say any change will come too late for many residents already suffering in the stifling heat.

Ford's announcement came the same day that opposition leaders called for concrete action from Ford, and a day after the premier criticized homes without air conditioning.

Ford said he and Long-Term Care Minister Merrilee Fullerton are already looking at how the relevant legislation can be changed, and exploring the option of providing money to make it possible. But Ford stopped short of providing an exact timeline for when the government would make those changes.

All three opposition parties said they would support such a bill.

As it stands, the province's Long-Term Care Act does not mandate air conditioning, but says homes without it must have a “cooling plan” in place.

A spokeswoman for Fullerton said the government was looking at the “best path forward to get air conditioning into homes that do not have it.”

The Long-Term Care Association, an industry group, said its members follow all provincial legislation, and it hopes the province will offer funding to retrofit facilities without air conditioning - or rebuild them, if necessary.

Wednesday's announcement offered no comfort to Jeanette Abrahams, whose 90-year-old mother has lived at Midland Gardens Care Community in east Toronto since early March, following the death of her husband.

“Without a timeline, it's just hot air coming out of his mouth,” Abrahams said of Ford's announcement.

Midland Gardens does not have air conditioning, Abrahams said, and the already-difficult conditions have been worsened by a recent heat wave.

Abrahams said her mother contracted COVID-19 a few months after moving in to the long-term care home, becoming one of 89 residents and 48 staff members diagnosed with the novel coronavirus.

She's since recovered, Abrahams said, but was left with damaged lungs and is now on oxygen therapy.

“She always looks very sweaty and listless,” Abrahams said. “We were told that the weakness and the listlessness is because of having had COVID-19, but it's also because of the horrendous heat that they are living in.”

A spokeswoman for Sienna Living, which operates the facility where Abrahams' mother lives, said the company purchased 10 additional air conditioning units for Midland Gardens, adding to some that were purchased last year.

She said they would be installed throughout the residence on Thursday, based on temperature readings. She said the company had also brought out all of the fans and implemented measures such as closing curtains in a bid to mitigate the heat.

Abrahams said the promise to mandate air conditioning in long-term care homes is a good thing, but is ultimately unlikely to come into effect soon enough to help her mom.

Glen Kenny, a University of Ottawa physiology professor, has studied how the body responds to heat over time and said the situation is particularly dire for the elderly.

“As we age there's deterioration in how the body can actually lose heat,” he said, noting that when older people are exposed to temperatures up to 40 C, they store that heat rather than shedding it.

He said heat can exacerbate underlying conditions and can affect blood pressure, making people more likely to fall over - which is particularly dangerous for seniors.

That's why it's so important that long-term care homes have appropriate temperature controls, said Jane Meadus, a lawyer and institutional advocate with the Toronto-based Advocacy Centre for the Elderly.

But she's concerned that the changes won't happen fast enough.

“Some of the older homes, I don't believe are going to be able to be retrofitted for air conditioning,” she said.

In those cases, the facilities would have to be totally rebuilt.