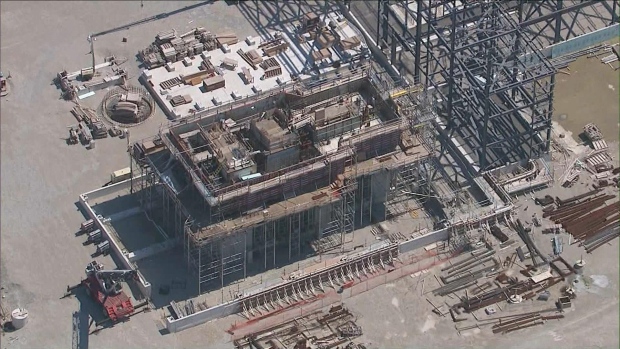 One of two cancelled gas plants is pictured while under construction.

"It strained credulity that no one thought maybe they should retain some of the emails, that there are retention obligations and things of that nature," said Cavoukian.

"Suffice it to say I was not pleased, putting it mildly, and you will see that reflected in the report that comes out."

Cavoukian also found there were no emails from McGuinty's former chief of staff, Chris Morley, who has not yet testified at the justice committee hearings into the Liberals' decisions to cancel gas plants at a cost of at least $585 million.

"Our investigation is ongoing and we are leaving no stone unturned," she said.

"We took the complaint very seriously, and we have conducted interviews and an extensive investigation."

New Democrat Peter Tabuns, who asked Cavoukian to investigate the missing email accounts from senior Liberals, said there is no doubt the staffers knew the legal requirements to keep records after leaving the premier's office.

"It certainly raises the suspicion that their records would be damaging to the Liberal government, and they decided that they would delete those records," said Tabuns.

"An awful lot of records seem to have been destroyed contrary to the law. Clearly, if people are destroying records there needs to be a penalty for that."

The Progressive Conservatives said someone in the Liberal team "went to great pains" to make sure that nobody ever sees what was destroyed.

"This is one of the biggest scandals to hit Ontario in decades and they knew that they'd be called upon and that their records would be called upon," said PC energy critic Vic Fedeli.

"I can only speculate how damning the information must have been for them to have consciously hit the delete button."

Government house leader John Milloy said the Liberals have now made public more than 180,000 pages of documents on the cancelled gas plants, including about 30,000 pages from the premier's office.

"So there's been lots of documentation from the premier's office," said Milloy.

"When it comes to specific individuals in specific instances, I have no knowledge of that situation."

"This government will go to any lengths to keep from the public the facts and the truth about those gas plants, and this just shows that they're even prepared to break the privacy laws of Ontario to hide the information," said Horwath.

A frustrated Cavoukian told reporters lawyers are keeping her from speaking out about the Liberals' slow and staggered release of thousands of other gas plant documents until her report is released in June.

"My lawyers muzzle me until the investigation report is actually out," she said.

"But I think you'll be pleased with the report. It goes into as much detail as we can possibly muster and we have left no stone unturned."

Later Tuesday, Energy Minister Bob Chiarelli testified he had no direct involvement in the decisions to cancel the gas plants and never discussed the file with his predecessor, Chris Bentley, who quit politics earlier this year.

The Liberals originally claimed the two gas plant cancellations cost $230 million, a figure that soared to $585 million after the auditor investigated the Mississauga cancellation and the Ontario Power Authority released updated cost estimates for the plant in Oakville.

Chiarelli predicted the total cost would rise again when the auditor reports in August on his probe of the Oakville cancellation.

"We're talking about numbers here that are changing, and they're going to change one more time I'm sure," Chiarelli told the committee.

The opposition parties say the Liberals cancelled the gas plants to save Liberal seats in the 2011 election, and accuse the government of trying to hide the true costs of the decisions.