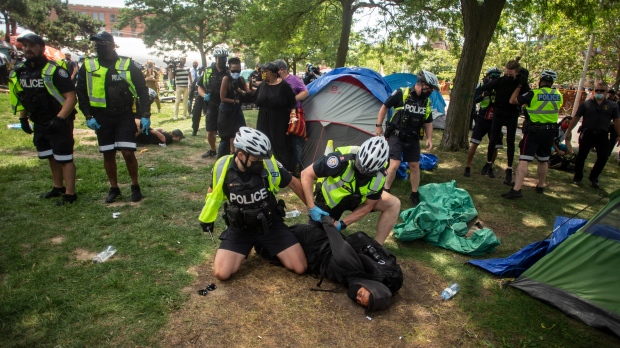 Toronto police detain encampment supporters as they clear the Lamport Stadium Park encampment in Toronto on Wednesday July 21, 2021. The operation came a day after a different encampment was cleared at a downtown park. The city has cited the risk of fires and the need to make parks accessible to everyone as factors behind the clearings. THE CANADIAN PRESS/Chris Young

TORONTO -- Ontario's privacy watchdog is looking into the dossier of information the City of Toronto compiled on homeless people as it planned to clear a park where they lived last year.

The development comes after The Canadian Press revealed the inner workings of the city's months-long planning of its operation to clear parks of encampments that had popped up during the pandemic. The dossier kept notes on behaviours, health information and photographs of those who lived in the park, internal documents show.

“Our office has reached out to the City of Toronto to obtain further information about this matter,” the Office of the Information and Privacy Commissioner of Ontario said in a statement.

“Any affected individuals may make a privacy complaint to our office.”

The commissioner's office noted it can also launch its own investigation if it suspects a privacy breach has occurred.

The city said it has responded to the privacy commissioner, saying the collection of personal information was in accordance with freedom-of-information laws. A city spokesman said it collected the information to better understand the “individual housing, health and supportive needs” as it sought to find a spot indoors for those living in encampments.

“The city has the discretion to collect the information as part of its law enforcement operations as well as ensuring that city services are directed to encampment occupants in an individualized fashion,” Anthony Toderian said in an email.

He said the legal authority was granted by city council under the bylaw named “COVID-19 Response Update: Protecting People Experiencing Homelessness and Ensuring the Safety of the Shelter System.”

“As the personal information was collected under a legal authority the use of this information would meet the requirements of the act,” Toderian wrote.

Top bureaucrats planned the operation for months, internal documents obtained by activists through freedom-of-information laws and shared with The Canadian Press show.

On June 22, 2021, the carefully planned operation swung into motion before dawn at Trinity Bellwoods Park. Drones hovered above as city workers erected tents around several homeless encampments within the park.

There were 268 city workers there that day, the documents show - including more than 100 private security guards the city hired - along with dozens of police officers.

The clearing drew scores of activists and supporters to the park to defend those living there.

Several clashes eventually broke out between police and the homeless and their supporters. A battle erupted over a fence that supporters tried to take down while police fought to keep it upright. Another skirmish broke out when police unleashed pepper spray, which inadvertently hit several security guards, the documents said.

Police in riot gear moved in near the end of the day, once most of the crowd had dispersed, and cleared the park with force.

The city has said it called in police to clear the area because protesters prevented staff from doing their jobs and didn't leave when they were cautioned.

The city also plans to hire security guards to monitor parks this summer.

In one titled “Trinity Bellwoods Park Analysis,” a map of the park is marked with locations of the tents and structures.

A chart identifies each person living in the park by name along with a photograph of their tent and, in some cases, photographs of the encampment resident.

There are also notes on each person's behaviour, and how the city expects they would respond when asked to leave the park.

The documents upset some people who lived in the Trinity encampments at the time. They said they did not consent to city's collection of their personal information - nor did they know the information was being collected.

David Naini, whose legal name is Navid Emanian, said he thought the information the city kept was “weird and creepy.”

“I think it's the opposite of what they're supposed to be doing,” the 57-year-old said.

In one entry, the city warns about a man - all names and photographs are redacted in the released documents - who was “most likely to escalate” and “has a large clutter surrounding encampment that he claims to make art with.”

A former Trinity resident who is known in the community as j the letter believes that is about him. (He says his legal name, Jeremy Magyar, harkens back to his life before becoming homeless.)

“They were taking photographs of me, of my tent, numbering the tent, but never telling me what they were doing with that.”

After he lost his tent at Trinity, he moved to a second encampment - which was cleared by the city and police a month laterin another episode that turned violent - and then a third.

At that point, the city shifted gears with a softer approach and offered him and several others living there permanent housing.

Now, dozens of his paintings line the walls, floors and ceiling in his apartment.

Still, he worries that without people living in highly visible encampments concerns facing the vulnerable - including the collection of personal information - will be swept aside.

“I kind of wish I was still on the forefront of being in a tent because I feel like they're just not going to take me seriously now,” he said.

“I don't know if there's justice to be had. We don't have any rights.”