Private schools should have procedures in place to report crimes: Police 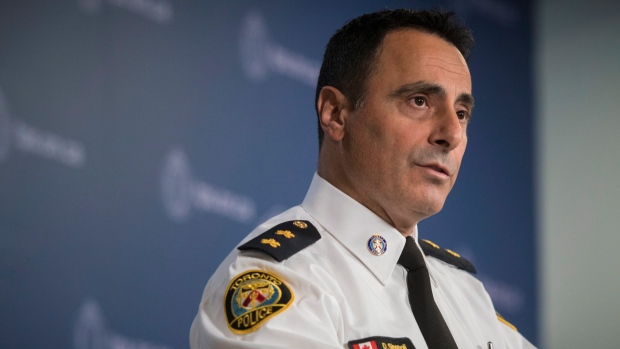 TORONTO - A high-ranking Toronto police officer investigating allegations of assault and sexual assault at St. Michael's College School says private schools should establish rules for reporting crimes to authorities similar to the ones all public schools have in place.

Insp. Domenic Sinopoli, head of the sex crimes unit, says all public school boards in the city have signed protocols with the Toronto police that spell out the institutions' responsibilities and the response to incidents where police involvement is required.

“Perhaps this is an opportunity where some of these private schools like St. Mike's can partner with the Toronto Police Service in developing a protocol for joint investigations,” Sinopoli said on Tuesday.

The Roman Catholic school has been at the centre of a police investigation into at least six incidents involving allegations of assault and sexual assault - some captured on video and circulated on social media.

Six students from the school were arrested on Monday and charged with assault, gang sexual assault and sexual assault with a weapon in connection with one of those incidents.

The school's principal, Greg Reeves, did not report the alleged sexual assault to police until officers, contacted by the media, showed up at the school 48 hours after the administration received a video of the incident. Police have since said the school should have reported the incident immediately.

That failure has raised questions about how private schools handle such incidents, and whether more government oversight is needed.

A spokeswoman for Ontario's Education Minister Lisa Thompson did not immediately respond to a request for comment, but according to the government's website, private schools “operate as businesses or non-profit organizations,” independent of the ministry.

They set their own policies and procedures, unbeholden to many of those that govern public school boards.

In Ontario, educators at private and public schools have an obligation under the Child and Family Services Act to report instances where a child aged 15 and under has been or could be sexually assaulted to the Children's Aid Society - something outlined in St. Michael's “child protection policy,” which is posted online.

It also notes administrators are “encouraged” to call police in an emergency.

That's contrasted with the agreement between the Toronto Police Service and the four public school boards that operate in the city - the English and French secular and Catholic boards.

That document says “police must be notified” when a public school learns of an alleged sexual assault, in addition to the Children's Aid Society.

Though current provincial regulations don't require that schools report allegations of sexual assault to police, the Child, Youth and Family Services Act could be amended to make it mandatory, said Marvin Zucker, an associate professor at the University of Toronto's Ontario Institute for Studies in Education.

“You can report something to children's aid, they may do nothing,” he said. “So you should always report to the police and children's aid. That covers all bases, and it should be done immediately.”

Zucker added that the Ontario College of Teachers, the province's self-regulating body for the profession, could also take private school teachers under its jurisdiction, adding another layer of oversight to the private school system.