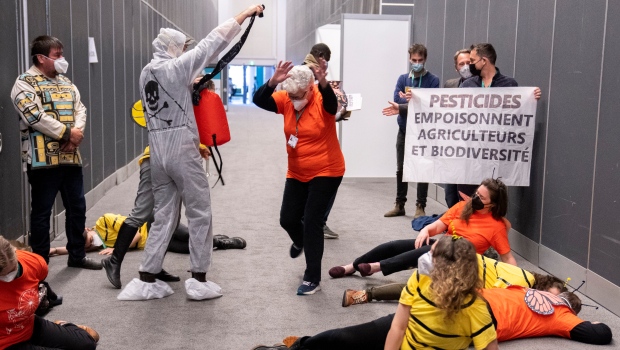 A member of the Wilderness Committee symbolically sprays fellow demonstrators, dressed up as insects, with the herbicide Glyphosate outside a conference given by agrochemical lobby group CropLife at the COP15 United Nations conference on biodiversity in Montreal, Thursday, Dec. 8, 2022. Looking on is Fort Ruppert hereditary chief David Mingo Knox, at left. THE CANADIAN PRESS/Paul Chiasson

MONTREAL - Federal Environment Minister Steven Guilbeault said Friday he's trying to light a fire under his international colleagues to pick up the pace on negotiations at an international meeting on saving the planet's biodiversity.

“I have already spoken to my peers, asking them to instruct their delegations to start removing brackets,” he said. “It's no longer time to add new text.

“There's a lot of things that negotiators could deal with before ministers arrive and that's what we're asking them to do.”

After nearly a week of deliberations, negotiators at the COP15 meeting in Montreal have reached agreements on three of 22 targets. Although one of them - ensuring Indigenous people are consulted and play a role in new conservation agreements - is one Canada's main goals, Guilbeault said he'd hoped for more consensus before other environment ministers start arriving next week.

“Things never go as fast as I would like,” he said.

Non-governmental groups lined up to scold negotiators for the slow progress.

“We see zero progress, a lot of focus on things which are losing time at a time when time isn't available, is a rare commodity here,” said Marco Lambertini, head of the World Wildlife Fund. “We are fast approaching what should be the conclusion of the adoption agreement.

“It's time for negotiators here in Montreal to stop spending time on technical issues and focus on what really needs to be achieved.”

Negotiators have had two years to prepare for the conference and there's no excuse for further delay, said Hindou Oumarou Ibrahim of the African group Indigenous Women and Peoples of Chad.

“Seriously, what they do in the last years?”

But not everyone was gloomy.

“From the team that's in the room, what I'm hearing back is that they're feeling good,” said Sandra Schwartz of the Canadian Parks and Wilderness Society.

“They said we've definitely seen progress. Brackets are being removed and paragraphs are being accepted.”

Schwartz acknowledged talks on the biggest issues are only just getting underway.

“There are some concerns things are being taken out to reach agreement at this stage,” she said. “It's still important we don't let the framework be weakened.”

The conference, a small city of 17,000 delegates in the heart of Montreal, is trying to establish hard targets for preservation of the Earth's ecosystems. Although 120 of the more than 190 countries in attendance have agreed on goals such as conserving 30 per cent of the globe's land and water by 2030, a deal remains elusive.

But Guilbeault, a veteran of almost two dozen such high-level environmental conferences as both activist and politician, said he's not giving up.

Delegates have until Monday to “clean up the text,” he said. And if they don't, politicians will have to do it themselves.

“If we get a text that's not as clean as we would want, that means the ministers will have work even harder,” he said. “We're determined to make than happen.”

Advocates have hoped for what they call a “Paris moment” at COP15 - an equivalent for biodiversity to the landmark 2015 agreement in Paris that set hard targets for reduction of greenhouse gases.

The two issues are intimately linked. Scientific research has concluded there's no chance of keeping climate change within the temperature of 1.5 C without the 30 per cent conservation level.

Scientists also say that level is the minimum needed to maintain natural systems essential to human life, from clean water to crop pollination.

It wants a deal to halt and reverse biodiversity loss by 2030, to protect at least 30 per cent of lands and oceans within the same time frame, to fund developing nations adequately to allow them to reach the same goals, and to include the participation by Indigenous people.

“The planet needs it,” she said. “We can't afford to keep waiting.”

This report by The Canadian Press was first published Dec. 9, 2022.

- By Bob Weber in Edmonton and Morgan Lowrie in Montreal