Tory briefed reporters on the $31.7 billion capital budget and the $11.6 billion operating budget on Tuesday morning ahead of formally presenting them at a meeting of the city’s budget committee.

The documents consist of $430 million in additional funding to expedite repairs to the Gardiner Expressway by eight years, a previously announced $38 million increase in the subsidy given to the TTC to pay for a number of service improvements and another $14.4 million for improvements to homeless services, including the addition of 181 new shelter spaces and the construction of new facilities for both women and youth.

The budget does not, however, include any increase in Toronto Police Service funding, despite uncertainty surrounding the ongoing contract negoations with officers.

“This entire budget is focused on getting Toronto moving, putting people first and keeping taxes low,” Tory told reporters, noting that the budget makes the largest investment in service improvements in recent memory. “It is a sensible, prudent, balanced budget and it does the right things.”

Tory wants city divisions to cut 2 per cent from budgets

While the proposed budget will be balanced once $86 million in anticipated provincial assistance related to the loss of housing grants is factored in, Tory told reporters that he will be asking the city’s agencies and divisions to find 2 per cent in efficiencies in order to generate a further $80 million in savings in time for 2016 budget.

The approach differs from the one favoured by Tory’s predecessor Rob Ford, who famously came into office and asked every department to cut their budget by 10 per cent in 2011.

“The previous administration sort of assumed the best way to go on a diet was to cut off your arm and sort of say you lost weight and that is not a thoughtful way to do this,” Tory said. “I am signaling now, the day that we are launching the budget process for this year, that I want to over the course of this year achieve at least $80 million in further efficiencies.”

Tax hike is slightly more than rate of inflation

Tory, however, noted that the rate includes a 0.5 per cent levy for the extension of the Bloor-Danforth line that was approved by the previous administration.

When both increases are factored in the average property owner will pay an additional $71.70 a year. That number will then jump to an extra $83.19 once a provincial shift in assesment values is included. The estimate is based on a home with an assessed value of $524,833.

Some of the other highlights of the budget include:

City council will have final say

The budget still needs to be approved by city council as a whole in March, but Tory said he is "very optimistic" that it will pass.

Discussing the budget with CP24 on Tuesday Coun. Ana Bailão said it is all about “finding the right balance.”

“It is a balance that starts going down the path that this city needs to go, which is stopping the claim that we can get services for free and starting to invest in certain areas of our city,” she said. “That is what this budget is doing and it is doing it in a responsible way.

Amendments can be made to the budget up until March 2 when executive committee is expected to vote on it. 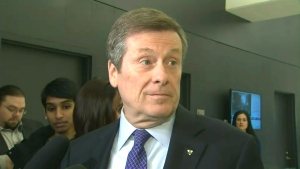 Five things you need to know about the budget

A list of everything you need to know about the 2015 operating and capital budgets.