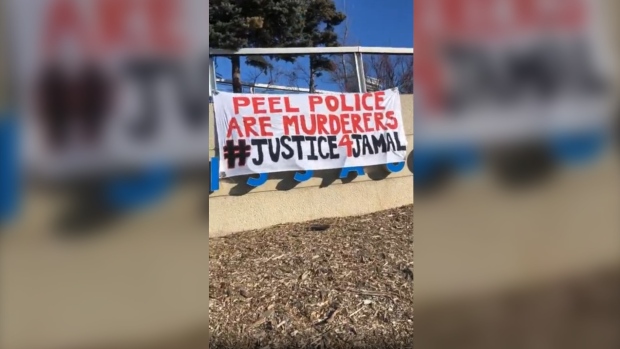 A banner protesting the police-involved killing of 28-year-old Jamal Francique is seen hanging near a busy intersection in Mississauga, Ont. Saturday. (Instagram/Maltonpeoplesmovement)

A group of protesters in Mississauga is demanding justice for Jamal Francique after a report by the province’s police watchdog found no reasonable grounds to criminally charge the officer who shot and killed the 28-year-old man last year.

On Saturday, members of the Malton People’s Movement (MPM) took to two of the city’s busiest intersections to voice their grievance by hanging signs that read “Peel Police Are Murderers” and “#Justice4Jamal.”

“There is no moving forward without accountability,” a protester named Asher told CTV News Toronto. “It’s angering to constantly see all these cases that have no results or no justice for families or the people who experience trauma from these incidents with police.”

According to the report by the SIU, police had been investigating Francique for allegedly dealing drugs and possessing a firearm. Peel police officers had observed Francique "travelling to various locations in breach of his bail conditions" and decided to arrest him for allegedly violating the terms of his bail, the report said.

At that time, the SIU said several plainclothes officers in unmarked vehicles attended Francique’s home in Mississauga and waited for him to get into his car.

When Francique got into his vehicle at approximately 5:45 p.m., the SIU said he began to drive away. Officers then attempted to box the car in while others got out of their vehicles with their guns drawn and pointed at Francique. 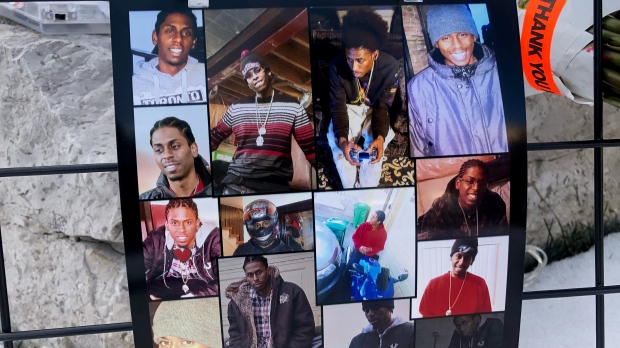 Francique accelerated toward a grassy area, the SIU said, and struck one car while one officer jumped out of the way. At that point, another officer on foot fired his gun four times as Francique drove towards him, the SIU said.

The car came to a halt 30 metres away after it hit a home.

Officers on scene said they were afraid that Francique had a gun -- which was later found in his satchel -- and did not approach his vehicle, the SIU said, waiting for the arrival of Peel Regional Police tactical officers instead.

At approximately 8:05 p.m. the SIU said tactical officers found Francique in the driver's seat in "obvious and acute medical distress," suffering from a gunshot wound to the left side of his head.

Francique was rushed to St. Michael's Hospital for treatment where he remained on life support for three days before he was pronounced dead on Jan. 10.

Joseph Martino, the director of the Special Investigations Unit, said that the subject officer told investigators that he feared for his life when Francique drove at him during the arrest.

However, he admitted there were aspects of the officer's conduct that raised questions.

"One may question, for example, the wisdom of the (subject officer) placing himself in the vicinity of a vehicle whose driver was evidently attempting to flee from police," Martino wrote.

The MPM says it has its own issues with the report, including allegations that Peel police misinformed the SIU about the time they arrived in the area and when exactly the shooting occurred.

The group says its “Peel-wide poster and banner drop campaign” is part of a series of several actions organized to protest the killing of Francique, as well as the deaths of D’Andre Campbell and Ejaz Choudry, who also died following interactions with Peel police in 2020.

In a statement issued Wednesday, Peel Regional Police Chief Nishan Duraiappah said, “Any time a life is lost due to an interaction with police, it is a tragedy that all involved wish could have been averted.”

“Family and loved ones are left behind with questions and the officers involved are forced to deal with the realities of the stress these outcomes cause.”