Protesters speak out about exclusion of police from pride parade 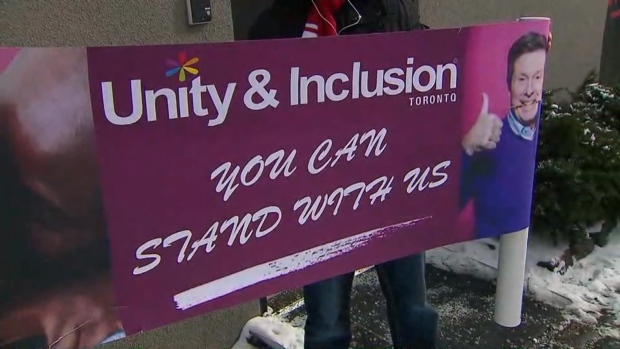 A sign that states 'You can stand with us" in solidarity with police officers who have been excluded from this summer's pride parade is shown. A small group of protesters, including one man who was involved in Toronto’s first Pride parade, have gathered outside the offices of Pride Toronto to speak out about the exclusion of police from this summer’s event.

A small group of protesters, including one man who was involved in Toronto’s first pride parade, have gathered outside the offices of Pride Toronto to speak out about the exclusion of police from this summer’s event.

The majority of those in attendance at Pride Toronto’s Annual General Meeting in January voted in favour of an unexpected motion to adopt a list of demands made by Black Lives Matter – Toronto, including the banning of police floats from the annual pride parade.

About two weeks after that vote, Police Chief Mark Saunders then formally announced that police would not march in this year’s parade, a decision the head of the union representing front-line officers likened to “political pandering” at the time.

In the days and weeks following the announcement by Saunders, though, the debate over the exclusion of uniformed police officers has continued.

On Wednesday, several people gathered outside Pride Toronto’s Berkeley Street offices to express their frustration with the situation.

The protesters held a seven-foot banner which reach “You can stand with us.”

Speaking with CP24, one of the protesters said that by banning police from the parade, Pride Toronto is effectively allowing the event to be “hijacked.”

“This was not on the agenda where the membership would have had the opportunity to properly consider this and vote. It was sent out to the membership of Black Lives Matter but the broader LGBTQ community was not aware,” Bryn Hendricks said. “By voting to accept all of the Black Lives Matter demands in one shot, including the banning of police, we now have a hijacking of this community by an organization that has said that they want to exclude one organization.”

Last July, members of Black Lives Matter- Toronto staged a sit-in protest at the parade to draw attention to a number of issues relating to pride and its inclusion, or lack thereof, of the black community.

The parade was halted for nearly 30 minutes as a result of the protest and only resumed after former Pride Toronto executive director Mathieu Chantelois signed a list of demands. Chantelois later recanted on those demands but subsequently resigned from his position.

Hendricks told CP24 that he “wholeheartedly” supports the other demands made by Black Lives Matter but can’t accept an edict to exclude police from Pride.

Fellow protestor Ron Forster, who was involved with the first pride parade in 1982, also echoed his remarks.

“We want the cops reinstated into the pride. The cops have been in the pride for 30 years and we need them. We need the cops,” he said. “What does the problems between the police and the black community have to do with pride?”

For its part Black Lives Matter – Toronto has previously said that the institutional presence of police at pride has made the event feel less inclusive for some members of the LGBTQ community and needed to come to an end.

“When you go to the pride parade as a black, queer or trans person who has been persecuted by the Toronto police, treated unfairly, it doesn’t feel inclusive for us,” co-founder Sandy Hudson told CP24 in February. “There are 13 different police forces, they turn on their sirens and they have their buses and squad cars. That is a larger contingent than any other group at pride.”