Ontario has reported another 351 new cases of COVID-19, making it the second straight day in which a new high has been set.

The jump in cases comes after the province confirmed a then record 211 new cases on Sunday.

There have now been a total of 1,706 cases of COVID-19 confirmed in the province, including deaths and recoveries.

On Monday morning, the number of fatalities involving people confirmed to have the virus remained unchanged at 23 from one day prior, but Ontario's associate chief medical officer of health confirmed this afternoon that they are aware of an additional 10 deaths not previously reported in the province's total.

It is also not clear if that number includes the seven deaths that have been confirmed by officials at a long-term care home in Bobcaygeon.

"I have bits and pieces of information to be honest," Dr. Barbara Yaffe said on Monday afternoon. "There was another death in Haliburton. We are not sure if it related to the outbreak or not."

She said she has received information about two additional deaths in Lambton, one in Haldimand-Norfolk, and one in Huron-Perth.

Resolved cases, meanwhile, have increased from just eight as of Sunday to 431 in this latest batch of numbers.

That increase is likely the result of the province switching from a system in which patients had to have two negative tests separated by 24 hours in order to be cleared to one in which all cases are automatically switched to recovered once 14 days has elapsed following the onset of symptoms and the patient hasn't been hospitalized. 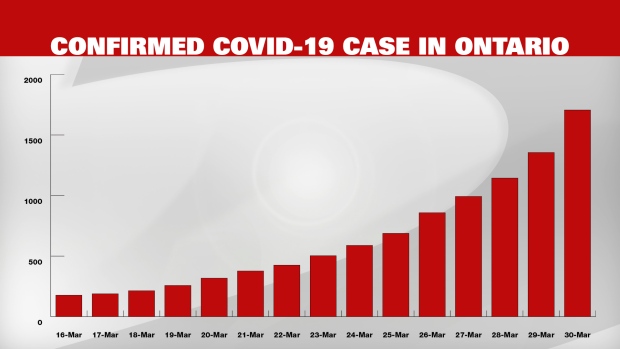 Yaffe said Monday that 100 patients are currently in intensive care with 61 on ventilators.

The ministry also says that 26.3 per cent of all cases involve people who have travelled in the last 14 days while 9.6 per cent involved people who are a close contact of another confirmed case. They say that 16.2 per cent of known cases fall under neither of those categories. The remaining 47.9 per cent remain under investigation.

Yaffe said Monday that the backlog of tests is going down rapidly and there are now only 5,650 cases still under investigation, down from 7,200 on Sunday.

She said in the past 24 hours, 4,000 tests were conducted and the number of daily tests is expected to rise. By mid-April, the province says it hopes to be able to conduct 19,000 tests each day.