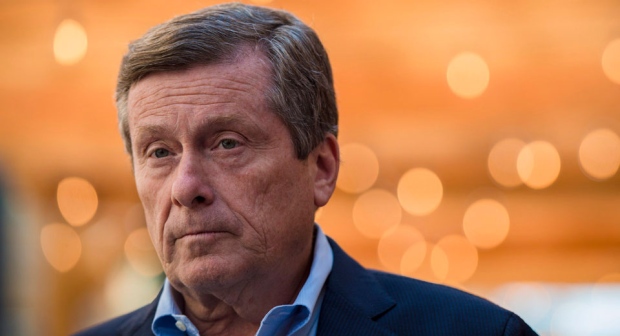 Mayor John Tory says that more than $200 million in previously announced provincial funding for social housing repairs and energy retrofits is now in “grave doubt” following the cancellation of the cap-and-trade program.

Premier Doug Ford’s new Progressive Conservative government announced the cancellation of the environmental program on Tuesday, fulfilling one of his main campaign promises.

In doing so, Ford also announced that his government would begin an “immediate and orderly wind-down of” all initiatives funded through revenues generated from cap-and-trade auctions.

That could include the $343 million in money for social housing repairs that the province committed to Toronto last August, though Tory told reporters on Wednesday that at least $129 million of that funding has already been dispersed.

“There is some other money that is now obviously in grave doubt because of the cap and trade cancellation,” he said of the remaining $214 million in promised provincial funding. “But I look forward to talking to him (Ford) about ways in which we can continue to see the province participate in repairs because they are sensible, they are good for the environment and they are good for the tenants.”

In 2013 city council approved a $2.6 billion, 10-year capital repair plan for crumbling TCHC building that was based on an expectation that all three levels of government would equally share the cost.

The provincial and federal governments, however, did not immediately come to the table, forcing the city to fork over its $870-million share over the first five years of the 10-year plan.

Then last August, the province provided the first significant infusion of outside funding with a promised $343 million over five years. At the time, Tory told reporters that the money would keep the TCHC from boarding up literally hundreds of derelict units.

“Those repairs are needed,” Tory said at an event at Union Station on Tuesday. “Doug Ford is a very intelligent business man and he will understand that it makes no sense whatsoever for us to have these valuable public assets, mainly TCHC units, and to allow them to fall down into a state of total disrepair.”

In addition to the status of promised money for social housing repairs, Tory said he is also concerned about the status of a fare reduction that would allow GO Transit riders to commute anywhere within Toronto for $3.

That program, which was included in the last provincial budget, was supposed to go into effect in early 2019 and also would have been paid for with cap and trade revenue.

On Tuesday, Tory said that he hopes “common sense” prevails and that Ford will honour the commitment. Tory has previously said that having a fare similar to that of the TTC is vital to the success of his SmartTrack proposal, in which a number of additional stations will be added to existing GO Transit lines.

“I hope that the very modest sum of money that this will cost, much more modest than the housing repairs, will be something Mr. Ford will be eager to make sure happens no matter what and that’s something I obviously will be talking with him about,” he said on Tuesday.

Ford’s Progressive Conservative government has said that it will evaluate whether to continue specific initiatives funded by cap and trade on a “case-by-case” basis.

The province had already cancelled the green energy rebate program, also funded by cap and trade, in anticipation of Tuesday’s formal announcement.