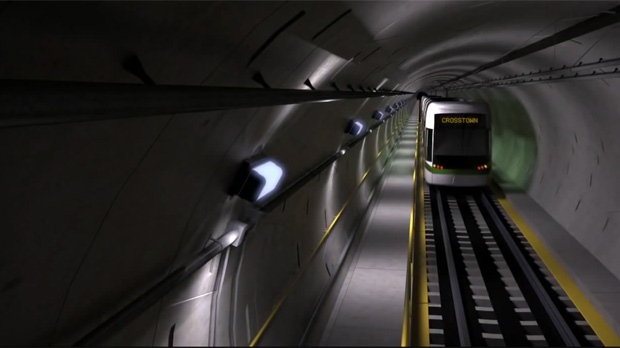 An artist's rendering of the planned Eglinton Crosstown LRT is pictured in this screen grab. (Handout/Metrolinx)

Today will mark a milestone in the construction of the Eglinton Crosstown as officials hold a media demonstration to test out the light rail vehicles slated for use on the line.

The 19-kilometre line isn’t slated to open until 2021 but officials will be holding a demonstration today to give the public a glimpse at the vehicles that will run along the route. The demonstration was scheduled for 10 a.m. but has been delayed until sometime later today.

According to a press release, this will be the “first public event where the vehicles will operate under their own power” and the first testing of the systems at a new vehicle storage facility near Black Creek Drive and Eglinton Avenue.

Construction on the Eglinton Crosstown began in 2011.

Once complete, the line will run underground for more than 10 kilometres from Mount Dennis Station to Laird Avenue and then run above ground to Kennedy Station.

Metrolinx President and CEO Phil Verster and officials from the consortium building the line, Crosslinx Transit Solutions, will be on hand at today’s event to speak with reporters.