Q and A: Trading Loonies for Bitcoins 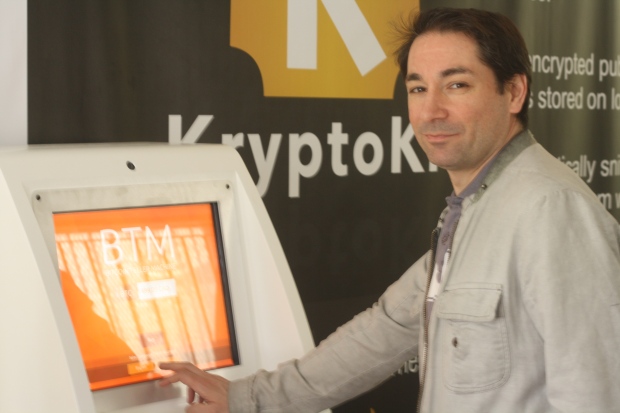 Anthony Di Iorio purchases Bitcoin using a Bitcoin ATM that is located in his office in downtown Toronto. (Chris Fox/CP24.com)

The executive director of the Bitcoin Alliance of Canada, Di Iorio helms an organization dedicating to spurring the growth of the fledgling currency and finding new ways to use it.

With Di Iorio organizing the first ever Bitcoin expo in the city this weekend, CP24.com recently sat down with him to talk about Bitcoin, its potential social applications and the challenges of creating something from nothing.

Q: So I think a lot of people have heard of Bitcoin, but for most it probably remains cloaked in mystery. In simple terms, what is Bitcoin?

A: Bitcoin is the world’s first decentralized digital currency. It is a currency that allows you to send value anywhere in the world instantly pretty much for free, removing the need for third parties like Paypal or Visa and replacing it with a peer-to-peer network of computers all around the world.

Q: How did you first become involved with Bitcoin?

A: I first heard about it on a radio station, wondered what the heck it was and then for the next six weeks I delved into it and barely slept. It just engrossed me because it seemed to be this amazing technology of distributed computing and distributed systems where mathematics and computers; not one organization, company or government is in charge.

Q: As this currency becomes more and more main stream the calls for government regulation are only going to get louder. Do you see that as something that is needed for Bitcoin to become accepted on a wider scale or could that be the beginning of the end?

A: I sit on the fence with that. On the one hand I see merchants and business owners who want to get involved but are not exactly sure how they fit in and how they are supposed to be treated , so it is like ‘Hey, regulate it and let me know what I have to do in order to comply.’ On the other hand I do understand the other side, where they are saying ‘Hey, this is our money and why should there be regulations on it?’ I really don’t know what the answer is, but I do see regulations coming this year and I just hope there is a balance because this is a technology that can really spurn an economy that is quite stagnant. Like the internet when it first started, there are amazing uses for this and we are just starting to see these passionate people and business owners coming forward and Canada seems to be stepping to the forefront and becoming the Silicon Valley of the Bitcoin space. Hopefully the regulators realize that this could be a great thing and allow for a balance when they are deciding how to deal with it.

Q: One of the challenges in growing a new currency like this is getting people to use it as opposed to holding on to it and I imagine that is especially difficult with Bitcoin, which has fluctuated wildly in value over the last several months.

A: Yeah, it is very new and as with any new currency it is almost like a tech stock where a lot of the news that comes out around the world whether good or bad can affect its price dramatically. As the amount of Bitcoin out there gets larger and larger, though, you will see a shrinking of those fluctuations. I guess my advice to people right now is to learn how it works, get a small amount and try it out but be very cautious and don’t expect to make a lot of money in the short-term. That said down the road the value should go up because it is a fixed and limited supply. There will only ever be 21 million Bitcoins created, but they are divisible by one hundred million units so there will be enough for the world to use. I think the price will be in the many thousands in the next couple years with a cup of coffee being worth something like .000001 Bitcoins down the road.

Q: You mentioned some of the industry that has sprouted up around Bitcoin. What form is that coming in?

A: We are seeing merchants that are accepting Bitcoin and reducing their Visa and debit card transaction fees and we are seeing a ton of people setting up exchanges , new software technology and new monetization strategies, which is really what is most exciting to me. For example, what if you could actually send fractions of a cent or a dollar to a journalist or a news organization because you like the content and you don’t even need a credit card? The possibilities are endless.

A: Yeah, I think it is right now. I can send a million dollars anywhere in the world instantly and I can do it for free. It is so much more than currency, though. This is going to affect the millions of people who don’t have credit cards or banking accounts who can now enter the international exchange market and it is going to change the whole realm of software and turn everything into decentralized systems. It was a great experiment Bitcoin and now we are learning that the benefits can translate into so much more that can affect society.

Q: What is the biggest challenge going forward?

A: I think it is the (potential) regulations. Hopefully the governments are not too heavy handed because we can really do something great with this. You know in the media we hear about the exchange collapse (Mt. Gox) and we hear about Silk Road and other things, but there is so much great in terms of how it can change third world countries and how micropayments can help charities and other organizations. Hopefully the regulators realize that this could be an amazing thing for this country.