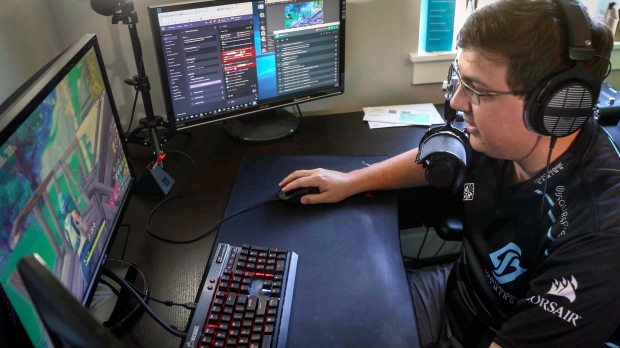 In this Sept. 11, 2018 file photo, Nick Overton, a professional video game player, plays "Fortnite" while engaging with his fans online from the game room at his home, in Grimes, Iowa. A Quebec law firm is seeking authorization to launch a class action lawsuit against the makers of the Fortnite video game, alleging it is highly addictive and can cause health problems. THE CANADIAN PRESS/Bryon Houlgrave/The Des Moines Register via AP, File

MONTREAL - Two Quebec parents are seeking the right to launch a class-action lawsuit against the makers of the popular video game Fortnite, alleging it was purposely made highly addictive and has had a lasting impact on their children.

Montreal-based Calex Legal is seeking to sue Epic Games Inc., the U.S. company behind the popular online multiplayer game, as well as its Canadian affiliate based in British Columbia.

The firm filed a request Thursday on behalf of two parents who approached them separately alleging their sons, aged 10 and 15, have become dependent on the game in short order.

Their case likens the addiction to a drug addiction, noting that the World Health Organization made a decision last year to declare video game addiction, or “gaming disorder,” a disease.

Class-action lawyers behind the case drew parallels to a landmark civil suit mounted against the tobacco industry in Quebec that alleged there was an intention to create something addictive without proper warning.

The boys “had all the symptoms of severe dependence - addiction - (and) it caused severe stress in the families as well,” lawyer Alessandra Esposito Chartrand said of the firm's clients. “It's the same legal basis (as the tobacco challenges) - the duty to inform about a dangerous product and responsibility of the manufacturer.”

Quebec Superior Court hasn't approved the action and the allegations have not been tested in court.

A spokesperson for Epic Games was not immediately available for comment.

The filing alleges the game - which had some 250 million players worldwide as of March 2019, according to the manufacturer - was designed specifically to addict users.

“The addiction to the game Fortnite has real consequences on the lives of players, many of whom have developed problems such that they do not eat, do not shower, and no longer socialize,” the filing states.

“Moreover, rehabilitation centres specifically dedicated to addiction to Fortnite have opened all over the world, particularly in Quebec and Canada, to treat people for addiction.”

Of the two parents - identified in the documents only by initials - the parent of the 10-year-old said the boy started playing Fortnite last year and had accumulated more than 1,800 games since December 2018.

“He has been playing Fortnite on an almost daily basis for several months, and he becomes very frustrated and angry when his parents try to limit his playing time,” the filing reads.

The document claims the 15-year-old has played more than 7,700 times since learning about the game in October 2017, and he plays, at minimum, three hours a day.

Esposito-Chartrand said while the fine print in the company's terms of service includes a class-action waiver that obliges users to go the route of arbitration to deal with legal problems, such a waiver is illegal in Quebec.

The province's strict consumer protection laws would also oblige the company to respond to the claim should it be certified.

Any potential compensation would be determined by the court.

The law firm said it's unclear how widespread the problem is.

Jean-Philippe Caron, the other lawyer handling the case, says several other parents have come forward since the filing has become public.

He said there was no way for the parents to know what their kids were getting into.

“If you haven't gone through addiction yourself, it's easy to criticize others. But when you're in an addiction - there's a reason there are so many rehabilitation centres.”