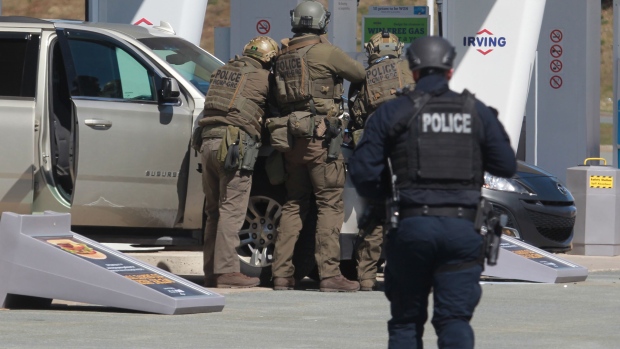 RCMP officers prepare to take a person into custody at a gas station in Enfield, N.S. on Sunday April 19, 2020. The Nova Scotia RCMP provided a partial timeline of what happened last weekend when a man posing as an RCMP officer killed 22 people before he was fatally shot by police on Sunday, a little over 12 hours after he started what would become one of the worst mass killings in Canadian history. THE CANADIAN PRESS/Tim Krochak

HALIFAX -- For eight long hours, Nick Beaton was in agony as he waited to learn what had happened to his missing wife.

By the early afternoon on April 19, he knew a lone gunman disguised as a Mountie had killed several people in rural Nova Scotia before an RCMP officer shot him dead at a gas station north of Halifax.

And he knew a woman had been killed on a road in nearby Debert, N.S., but no one would tell him who it was.

“I just wanted to know,” Beaton said in an interview. “Maybe it wasn't her out there. Maybe she's just wounded and down a side road bleeding out. Maybe I can go and help her. Maybe I can save her. Eight hours of that.”

At 5:50 p.m., two plainclothes officers arrived to deliver the awful news: his wife Kristen was dead, one of the gunman's 22 victims - though Beaton insists the number should be 23 because the official count does not include the couple's unborn child.

“I was in my backyard bawling my eyes out, and I was on my knees praying,” Beaton said, his voice cracking with emotion.

Seven months later, Beaton says he wants to know why it took so long for the RCMP to tell him what had happened that grim day.

That question will be among the many complex and heartbreaking issues that will be examined by a federal-provincial inquiry that is now preparing for public hearings. The three commissioners leading the inquiry were handed broad terms of reference on Oct. 20. Here are four other questions they will face:

1. Were red flags ignored before the shooting started?

The RCMP have confirmed the gunman killed 13 people near his summer residence in Portapique, N.S., on the night of April 18, and another nine people the following day in northern and central Nova Scotia.

In all, Gabriel Wortman spent 13 hours killing people he knew and others he didn't.

Wayne MacKay, a law professor at Dalhousie University in Halifax, says there's evidence to suggest that key warning signs were ignored long before the shooting started.

“A lot of people knew that Mr. Wortman was a pretty troubled individual who was doing some odd things,” MacKay said in an interview. “But nothing was done.”

As early as May 2011, police in Nova Scotia were told Wortman had said he wanted to “kill a cop” and was feeling mentally unstable. An officer safety bulletin, distributed by the Truro Police Service, said a police source had indicated Wortman was upset about a police investigation, had access to weapons and was having some “mental issues.”

An RCMP spokeswoman confirmed the police force received the bulletin, but Cpl. Jennifer Clarke said she couldn't comment on how the Mounties responded, because the records were purged long ago.

The one-page bulletin, however, wasn't the first detailed warning that police received about the shooter.

Former neighbour Brenda Forbes says that in the summer of 2013, she told the RCMP that Wortman owned a cache of weapons and was prone to domestic violence. She said neighbours described how he had beaten his common-law spouse behind one of the properties he owned in Portapique.

But none of those neighbours would corroborate the story to police at the time. MacKay said the behaviour of those people deserves closer scrutiny. “The failure of others to substantiate and support her statements on either the firearms or domestic violence led (the police) to do nothing,” MacKay said.

2. What role did misogyny and sexism play in the mass killing?

After the killings, several of the gunman's neighbours came forward to describe the man as jealous, controlling and abusive. And police confirmed that on the night the killing started, he had bound and attacked his longtime partner.

The inquiry has been tasked with examining the role of intimate-partner violence, which is something activists Jeanne Sarson and Linda MacDonald say is key to explaining what happened.

“His neighbours were afraid of him, and he had a history of violence,” said Sarson, who together with MacDonald founded the advocacy group Persons Against Non-State Torture. “The women he was connected to, he didn't respect their equality.”

MacDonald said exploring the role of gender-based violence will be important because there is evidence of a link between misogyny and mass killings. “If we understand the impact of misogyny and sexism, we'll start to prevent atrocities like this,” she said.

Researchers say the motives of men who commit mass shootings are often complex and difficult to discern, but one factor connects many of them: a history of hating women.

In more than half of all mass shootings in the United States from 2009 to 2017, an intimate partner or family member of the perpetrator was among the victims, according to a study by the U.S. gun control advocacy group Everytown for Gun Safety.

3. What could the RCMP have done to end the carnage sooner?

For Nova Scotia lawyer Robert Pineo, this is the key question facing the inquiry. “It just seems to me like a complete failure in tactics and command,” he said in an interview.

Pineo says there is evidence the RCMP's efforts to track and contain the killer were inadequate.

“We know that not very many police were dispatched to Portapique in the beginning hours,” said Pineo, whose law firm is behind two proposed class-lawsuits, one that names the gunman's estate and another that names the RCMP and the Nova Scotia government.

He also raised questions about the number of roadblocks that were set up and the warnings issued to the public as the killer eluded police while driving a car that he had modified to look exactly like an RCMP cruiser.

The RCMP have faced criticism for failing to use a national alert system, which would have allowed them to warn residents about an active shooter through messages on TV, radio and wireless devices. Instead, they used Twitter to provide updates on the killer's last known whereabouts.

Beaton said the use of Twitter never made sense to him. “We got (Alert Ready) texts about COVID, but we didn't get alerts about a crazed gunman shooting, killing and burning things,” he said.

4. Did the perpetrator have ties to the Mounties or organized crime?

Published reports citing anonymous sources have suggested the shooter was an informant for the RCMP and may have had links to organized crime. The RCMP have denied having any relationship with the killer.

MacKay, however, says the Mounties are constrained from saying anything publicly about their sources to ensure their safety.

“If there is some kind of link, and they are not telling the truth about that, my understanding is that there is nothing illegal in that if it is to protect the identity of an informant,” MacKay said. “They can legally misinform people right up to the courts. But they are not allowed to lie to judges about that.”

Since the upcoming inquiry has quasi-judicial status and will require testimony under oath, this could put the RCMP in a difficult position.

“If there was a link, then it raises questions about how much they knew about his questionable character,” MacKay said.