Racism probe in Peel school board has unearthed 'stories of marginalization, discrimination' 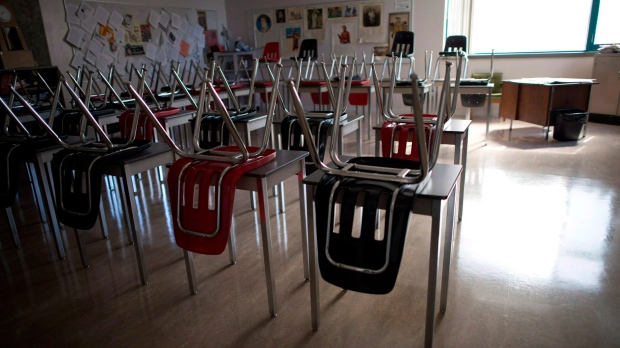 A vacant teachers desk is pictured at the front of a empty classroom is pictured at McGee Secondary school in Vancouver on Sept. 5, 2014. THE CANADIAN PRESS/Jonathan Hayward

An ongoing review into concerns over anti-black racism in the Peel District School Board has already unearthed “painful accounts of traumatic experiences” that speak to “systematic and historical disparities between and across racial, ethnic and cultural groups,” an interim report suggests.

Education Minister Stephen Lecce ordered the review in November following a request from the board.

In an interim report dated Dec. 30, the three people appointed by Lecce to conduct the review said that they have received more than 350 requests for interviews and written submissions so far but “will not be able meet with everyone who has expressed interest” considering the “urgency” to complete their work.

They said that in December alone they met with approximately 50 different people, individually and in groups.

During those discussions, the reviewers said that they “consistently heard painful accounts of traumatic experiences in schools and school communities.”

“The narratives shared with us signal a profound lack of respect in relationships, demonstrated by stories of marginalization, discrimination, differential behavior, and harassment,” the report states. “To date, these sentiments relate to leadership, governance, human resources, anti-Black racism, Islamophobia and other forms of inequities put forward by students, parents, educators, staff, senior administrators, elected officials and community members who we have met with thus far.”

The review is being conducted by lawyers Ena Chadha and Suzanne Herbert as well as long-time civil servant and former deputy minister Suzanne Herbert.

It is intended to address equity concerns in the board, including “serious issues related to governance, leadership and human resources practices.”

While there has been some criticism around the quick timeline for the review to be completed, the reviewers said in the interim report that they believe the approach will allow them to “pinpoint problematic structures and dynamics” within the board and make recommendations that will ultimately “effect meaningful change.”

They, however, do say that they are aware that their work “may not satisfy the desire within the community for deeper and more thorough consultations and truth-sharing.”

“It is deeply disturbing to hear from the province’s own reviewers that the Ford government’s inquiry into anti-Black racism in the Peel District School Board ‘may not satisfy the desire within the community for deeper and more thorough consultations’. New Democrats join with Black communities across Ontario in reminding Minister Stephen Lecce and the Doug Ford government that meaningfully addressing anti-Black racism is the reason for this inquiry and that pushing these important concerns to future consultations ‘under a renewed mandate’ is unacceptable,” she said.

In their interim report, the reviewers say that they have planned for 13 days of interviews in January and will also be partaking in “facilitated consultations with students and parents.”

They say that they intend to make recommendations “that will directly address identified barriers to student and staff progress” when they file their final report sometime this winter.

They also say that they believe a post review process, in which community members would be able to “speak their truth” to trustees and senior staff, will be necessary for the board to “regain public confidence.”

“Many members of the community have told us that they are seeking a transformative approach to addressing the gaps in educational and employment outcomes at the PDSB as well as improved board and community relations,” the report notes.

In a statement issued following the release of the interim report, Lecce said that he has met with students “to hear first-hand their lived experience” and does believe that they “deserve better.”

He said that he hopes the final report “will build momentum for the transformational change racialized families are seeking, after a period of inaction.”

“I will continue to empower students - notably from racialized communities - to be a part of the solution, to have a voice, and to work collaboratively to eliminate obstacles to academic success and well-being,” he said.