A year-long investigation that came to light with a series of pre-dawn raids Thursday has cut off an alleged drug- and gun-trafficking pipeline operated by a gang connected to crimes including murder, Toronto’s top cop says.

Police announced at a news conference that 43 people have been arrested in Project Traveller since the investigation began in June 2012, including 19 in Toronto and nine in Windsor in Thursday's raids, and additional arrests are expected.

Raids were also carried out in Alberta.

Chief Bill Blair said the Dixon Bloods and their associates are accused of smuggling guns into Canada from the U.S. across the Detroit-Windsor border, in addition to being involved in shootings, robberies and drug trafficking.

Since the Toronto-led investigation began a year ago, officers have seized 40 firearms, more than $3 million worth of drugs, and half a million dollars in cash, said Deputy Chief Mark Saunders.

After surfacing in 2006, the Dixon Bloods are based in the Dixon Road area between Kipling and Islington avenues, Saunders told reporters.

Blair said “many” crimes were centred in that neighbourhood, but the gang’s alleged activities, including gun trafficking in Ontario and Alberta, ranged “far beyond that area.”

Police focused on a cluster of high-rise apartment buildings in that neighbourhood when heavily-armed tactical officers began the early-morning raids at about 5 a.m., including one at a building at 320 Dixon Rd., where an alleged cellphone video of Mayor Rob Ford smoking from a glass pipe was reportedly stored.

At the news conference, Blair declined to answer questions about Ford and the alleged video.

The building at 320 Dixon Rd. was once home to Toronto homicide victim Anthony Smith, who was pictured in an alleged photo of the mayor and a group of men. The photo was circulated with reports of the alleged video.

It is also the building where two Toronto Star reporters say they watched the alleged video after they were contacted and asked if they would purchase it. The alleged video has not surfaced, and its authenticity has not been substantiated. On his radio show May 26, Ford told a caller "there's no video."

North of the Dixon Road apartment complex, police executed a search warrant at a house on Mercury Road, near Highway 27 and Rexdale Boulevard.

The house belongs to Muhammad Khattak, who is one of the young men pictured in the alleged photo of Ford, sources told CP24 crime specialist Sue Sgambati.

As he arrived at city hall for a council meeting, Ford told a crowd of reporters he was unaware of the raids until he encountered media outside his home Thursday morning.

Ford said his cable "was out," suggesting to reporters he was unable to watch televised reports before leaving home for city hall.

“Like I said, I know as much as you do right now,” the mayor said as he stepped out of an elevator and walked to his office.

Ford said he wasn’t given advance notice or briefed by police about the raids, and he has not talked to the police chief.

Later, as Ford headed to the council meeting after spending a few moments in his office, he told reporters a police spokesman “called my staff and briefed them a little bit, from what I understand.”

Ford congratulated police for the arrests.

The mayor was then asked if police are investigating him because of the allegations.

“That’s news to me. They can investigate me all they want. I don’t do anything wrong,” Ford said.

In response, Blair said the police service’s standard practice is to share information on a need-to-know basis.

He confirmed that police are monitoring the situation involving Ford “in its totality.”

Toronto police were investigating the existence of an alleged video involving Mayor Rob Ford several weeks before the story first appeared in the Toronto Star, CTV News has learned.

A highly-placed source confirms to CTV News that on those wiretaps, persons of interest discussed the video in detail, and referred to the mayor's presence in the video.

Blair dismissed a question about wiretaps, saying he is unable to comment on "investigative methodologies" or the evidence collected with them.

Police use flash-bangs to create distraction

As police swept through the Dixon Road apartment buildings, tactical officers shut down the elevators to prevent people from fleeing and used flash-bang devices, which emit a bright light and loud noise, to create a distraction as they raided multiple suites.

As police conducted their search, Amber Gasla, a resident of one of the buildings, said she approached an officer and offered to open her suite's door for police, but they kicked it in.

“I have a four-year-old son, you have no reason to be kicking my door down for no reason,” a visibly upset Gasla told CP24 outside the building. “I said (to police) if it’s my door and you’re looking for anybody I would gladly open the door and I have a key.”

Gasla said a police officer told her the building was raided "because of Rob Ford's situation."

For the next several days, police are increasing their presence in the neighbourhood in an effort to ease any public safety concerns and gather information for the investigation, Blair said.

A command post is set up in front of 320 Dixon Rd.

Meanwhile, Blair and Saunders repeatedly hailed the officers for completing the raids without incident or serious injury under potentially-dangerous circumstances.

Saunders said 42 tactical teams from 17 police agencies were involved as officers carried out 50 warrants in Toronto and Windsor.

Before the raids, police gathered at a staging area at the Toronto Congress Centre and then fanned out in marked and unmarked police vehicles, and rented cube vans.

Dozens of vehicles, including fire trucks and ambulances, were part of the convoy as police struck multiple locations.

With files from CP24 reporters Cam Woolley and Sue Sgambati, and CTV News. 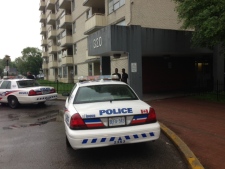 A Toronto police cruiser is parked outside an apartment block on Dixon Road after tactical officers conducted a raid Thursday, June 13, 2013. (Cam Woolley/CP24)