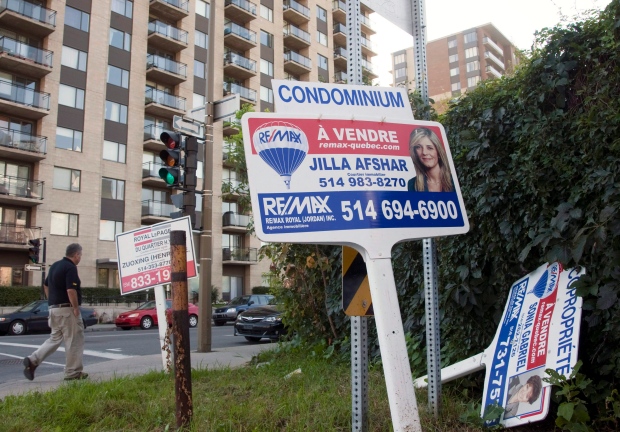 For sale signs stand in front of a condominium Tuesday, September 27, 2011 in Montreal. THE CANADIAN PRESS/Ryan Remiorz

MONTREAL -- The Quebec election has real-estate agents on both sides of the Quebec-Ontario border agreeing on one thing: the market is on hold as homebuyers await the outcome.

Realtors say a Parti Quebecois majority on April 7 likely wouldn't result in the kind of mass exodus that followed the party's first election victory in 1976.

Thousands of Quebecers, mainly anglophones, fled the province after the Rene-Levesque-led PQ stunned the rest of Canada by surging to a majority win.

Libby Broady, a Montreal real-estate broker, says the market is taking a wait-and-see attitude this time around.

"Everything seems to be on hold from the buyers' standpoint," the 69-year-old said in an interview. "The buyers are not jumping in and making offers."

Broady, a real-estate agent in Beaconsfield, Que., for 26 years, said the local market improved this past January and February after a slow 2013.

That momentum, according to Broady, stalled when the PQ called the election in the first week of March.

"We've had a complete drying up of sales since the announcement for the election and we have had a real slowdown in the number of visits to our listings," she said.

She stressed she is not seeing people wanting to sell their homes and move to nearby communities on the Ontario side of the border.

But that could change, she believes, if the PQ wins the election.

"Maybe if the PQ got in with a majority and started talking referendum again, then you would see a completely different scenario," Broady said.

"Then we might see people seriously wanting to list their homes and get out -- but we're not at that point yet."

She suggested the elderly may be among the first to consider leaving Quebec if the PQ wins.

"It is the retirees who are fed up and they say it's time to leave," she said.

"I haven't seen a lot of them putting their houses on the market in order to leave, but maybe that will happen if the PQ gets in with a majority."

One realtor in Hawkesbury, west of the Quebec border, agreed with Broady that nothing is moving.

Lana Barnes said the problem seems to be that Quebecers -- mainly those living on the western half of the Montreal -- cannot sell their homes.

"The more she flaps her yap, the better it is for my business because people keep coming here (to inquire)," said the former Montrealer, who left Quebec with her husband in 1979.

"We married 37 years ago when all the crap was happening in Quebec," said Barnes, 60.

Hawkesbury, which is located on the Ottawa River, is less than a one-hour drive from Montreal.

Barnes said that since the PQ's minority victory in September 2012, inquiries from Quebec-based buyers have tripled -- from two to six calls per week.

But real-estate statistics provided to The Canadian Press indicate there was no significant increase in overall home sales in Hawkesbury in the months after the PQ's election.

A monthly sales report showed that 11 houses were sold in September 2012, 12 the month after and 11 in November. In 2013, sales in the Hawkesbury market peaked at 20 homes.

The report was provided by the Cornwall and District Real Estate Board.

Jackie Smith, a real-estate agent in Lancaster, another Ontario town just across the Quebec border, agreed nothing will happen until after the election.

"We get the feeling that everybody who may be even thinking of moving is just sitting and waiting and reading the papers and watching TV and just seeing what happens," she said in an interview.

Smith, 68, has been selling homes in the Lancaster area since leaving Quebec in 1992.

"For all that time, we've had buyers from Quebec coming in, it ebbs and flows according to what party is in and what they're saying and doing," she noted.

Smith said people who settle in her area, which is made up of villages and rural properties, are concerned about the political situation, but are also looking for reasonably priced housing.

Jacques Perreault, president of the Cornwall and District Real Estate Board, pointed out the market is now being affected by the retirement of baby boomers.

He said retirees may want to sell their home in a large city and move to a smaller town because it would be more comfortable and less stressful.

Perreault, a Cornwall real estate agent for 12 years, added he's not sure Quebec's political situation would be the main reason for a move out of the province.

"I think we'll find out April 8 what will truly happen -- depending on the election."