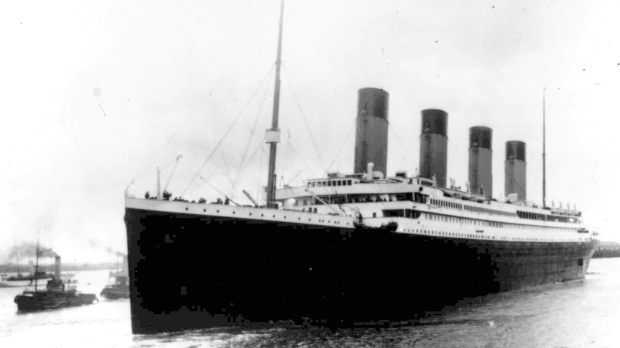 FILE - In this April 10, 1912 file photo the Titanic leaves Southampton, England on her maiden voyage. The company that owns the salvage rights to the Titanic shipwreck has indefinitely delayed plans to retrieve and exhibit the vessel’s radio equipment because of the coronavirus pandemic, according to a court filing made by the firm on Friday Jan. 29, 2021. (AP Photo/File)

MONTREAL - Researchers from Universite du Quebec a Rimouski are trying to solve the mystery about whether a letter in a bottle washed up in New Brunswick in 2017 is from a young victim of the Titanic.

The letter was purportedly written by Mathilde Lefevbre, a 12-year-old schoolgirl from northern France who was a passenger in third class and among the poorer people on the ill-fated passenger liner.

The letter, written in French, reads: “I am throwing this bottle into the sea in the middle of the Atlantic. We are due to arrive in New York in a few days. If anyone finds it, tell the Lefebvre family in Lievin,” referring to a commune in northern France.

A New Brunswick family discovered the bottle in June 2017 on a beach in Hopewell Rocks, in the Bay of Fundy, more than 105 years after the letter's alleged date. They asked academics to investigate whether the document is original.

Manon Savard, an archeologist and geographer from UQAR, said chemical analysis of the glass bottle and radio carbon dating on the cork and bits of paper used to seal the bottle yielded dates that were consistent with the early 20th century.

“If we would have had a very recent date, we could tell that it was a hoax,” Savard said in a recent interview. “An ancient date doesn't rule this out, but it's consistent as well.”

Academics also know that Mathilde Lefebvre, who was just shy of her 13th birthday, was a passenger on the ship and perished along with her mother and three siblings. The family is among 1,500 people who died when the Titanic sank.

Her story is well known among Titanic sleuths and experts - Lefebvre was even part of a French museum exhibit dedicated to the children who died during the vessel's journey from England to New York City.

Lefebvre, her mother and three siblings were en route to the United States to reunite with family; her father, Franck Lefebvre, was a miner working in Iowa. He would be deported in August 1912 after it was discovered he was living in North America illegally.

Researchers did not test the paper on which the letter is written because they didn't want to damage it. They also note the letter's contents don't contain any information that isn't publicly available about the young girl.

But researchers said they have doubts about the handwriting.

Historian Maxime Gohier noted the fine script on the document and said the letter wasn't written in a fashion consistent with how kids were taught in France in the early 20th century. He also said the writing was advanced for someone that age.

“It would be a bit unusual for a girl of 13 to be that professional in writing,” Gohier said in a recent interview, adding that it is possible someone else on board the boat could have written the letter for her.

Nicolas Beaudry, a historian and archeologist at the university, said researchers could be dealing with a very old hoax - or a modern deception that uses older materials.

“Throwing bottles into the ocean was common in the late 19th and early 20th century as it is now,” Beaudry said in a recent interview. Messages in bottles, he added, were often published even if the press had doubts about their authenticity because it was thought not doing so would be denying the last wish of a lost soul.

“A hoax is very possible, whether it's a 100-year-old hoax or a recent hoax,” Beaudry said. “But so far we haven't caught a prankster red-handed.”

There's also the question of how the bottle ended up in New Brunswick after being dropped into the middle of the Atlantic Ocean.

Savard said a colleague who is an oceanographer looked at sea currents from the period and along with Norwegian academics, created computer simulations that indicated the vast majority of objects from the Titanic ended up on European shores.

“It's not impossible that objects would end up on the North American shore, but the probability is quite low,” Savard said.

The letter has since been returned to the family that found it.

Researchers contacted distant relatives of the 13-year-old residing in Aix-en-Provence, in the south of France, and media in that country caught wind. The Quebec academics decided to publicize their work to see if doing so would attract someone who had a sample of Lefebvre's writing to help authenticate the letter.

“That's one of the reasons we went public, we ourselves are throwing a bottle into the sea,” Beaudry said.

“If somewhere, a sample of her handwriting exists in an attic, in a basement, in the archive of a school in northern France, it's obviously very unlikely, just as unlikely for a bottle to end up on North American shores, but who knows.”

Beaudry said it's a fascinating object, adding that researchers may never confirm whether the document is from Lefebvre's hand.

“It's an interesting reminder of a very moving piece of history, of the fate of Mathilde and her relatives,” Beaudry said.

“It's a rare voice from a child, a female, a French speaker, in a mythical tragedy whose narrative has been built basically around the male Anglo-Saxon heroes of the first class.”

This report by The Canadian Press was first published May 15, 2021.