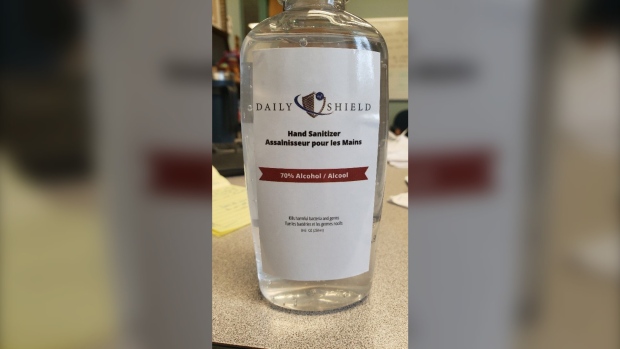 Health Canada became aware that a counterfeit version of the authorized Daily Shield hand sanitizer was found for sale at a Dollarama store in Thunder Bay, Ont. (Health Canada)

Health Canada has suspended the licence of a Mississauga manufacturer of hand sanitizer and issued an expanded recall for some of its products found to contain unauthorized ingredients that could be unsafe for consumers.

The government agency said Thursday that Bio Life Science Corp.'s Daily Shield-branded hand sanitizer is being pulled off the shelves of Dollarama Inc. and any other unspecified retailers across the country it may have been sold at.

The 250 mL product was found to contain less than the recommended amount of ethanol, which decreases the chances of the product being effective at killing bacteria and viruses. The sanitizer also contained methanol, which poses serious health risks because it can cause severe adverse reactions or death when ingested.

“Health Canada also identified that Bio Life had a number of good manufacturing practices violations, including poor record-keeping, lack of control of inventory, and lack of finished product testing,” the agency said in a release.

“As a result, Health Canada directed the company to stop all licensable activities. All product licences held by the firm have been suspended and an intent to revoke the COVID-19 site licence has been issued.”

Bio Life did not immediately response to a request for comment.

The enhanced restrictions against the company come after its sanitizer was first recalled last week.

The agency said it has now determined the items are not counterfeit, but that it is continuing to investigate Bio Life's other products - wipes, gels and liquid-based sanitizers - to determine if other action is needed.

When asked whether the agency will be fining or charging Bio Life, Health Canada said in a statement that it is “committed to stopping the production and import of unauthorized or counterfeit drugs in Canada and will not hesitate to take additional actions as necessary to stop this illegal activity.”

Since the COVID-19 pandemic began and dozens of distillers and new companies began pumping out hand sanitizer, Health Canada said it has had to recall more than 100 of the products it found concerning.

Montreal-based Dollarama, where Bio Life's problematic hand sanitizer was first found by Health Canada in Thunder Bay, Ont., previously said that the product was available in roughly half the chain's stores and each location sold about 17 bottles.

Dollarama said the sanitizers were removed as soon as Health Canada began investigating and the agency is now working to verify that it is no longer being sold by any other distributors or retailers.

Anyone who purchased this product, Health Canada said to stop using it immediately.

- With files from Adam Burns