Parts of a security camera video have been released showing a portion of what appears to be an interaction between Toronto police and Regis Korchinski-Paquet moments before she fell from a balcony two years ago.

The video was shared by Jason E. Bogle, the lawyer representing Korchinski-Paquet's family, on Wednesday afternoon during a news conference announcing a $10-million civil lawsuit in connection with her death.

In the statement of claim filed on Monday, the Ministry of the Attorney General of Ontario, the City of Toronto, the Toronto Housing Community, Special Investigations Unit (SIU) Director Joseph Martino and five Toronto police officers who responded to the incident were named as defendants.

Korchinski-Paquet died after she fell from a balcony on May 27, 2020, while in the presence of Toronto police officers, who were called to her High Park Avenue apartment by Korchinski-Paquet, her mother and brother, who all placed 911 calls following a family dispute.

The SIU, which investigates incidents involving police that resulted in a death, serious injury, sexual assault allegations or the discharge of a firearm, found no grounds to charge the responding officers. It said that despite early claims that she was pushed, Korchinski-Paquet was alone on the balcony when she fell.

"We have filed a claim outlining that the report made by Joseph Martino was woefully inaccurate in respect to the facts that the family recalls occurring that day," Bogle said. "Moreover, it is our position that the reported facts of that day do not align with the video recordings that are captured of the assaultive behaviour of Officer Weddell on Ms. Korchinski-Paquet, minutes before her death."

Bogle played some parts of the video recordings during the news conference, which was also attended by the family. He began by showing the time when an officer he identified as Weddell arrived at the scene.

Bogle pointed out that Weddell was carrying a "firearm." The video plays showing the officer holstering the "firearm" across his back as he walks toward the hallway. 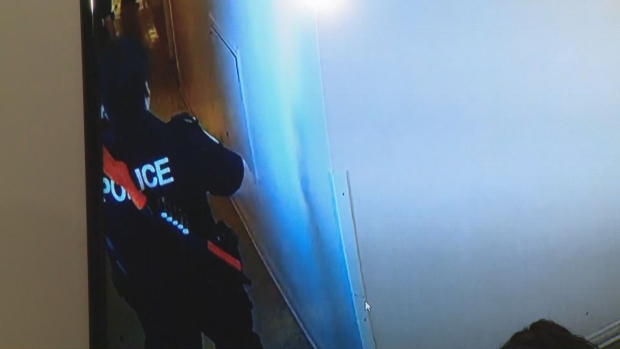 Bogle noted that Weddell and another officer responded to the call despite the first three officers who arrived and secured the scene had reported that there were no safety issues.

Weddell then allegedly engaged in "assaultive behaviour" when he reached the unit, grabbing Korchinski-Paquet and pulling her down to the ground, Bogle said.

A short time later, Korchinski-Paquet was allowed to enter her unit again, Bogle said. He then skipped to the part of the video where he said it shows three officers, including Weddell, going inside Korchinski-Paquet's apartment.

Bogle then skipped ahead to the part of the video when officers are seen walking away from the unit. He pointed out that Weddell's firearm was no longer in the same position as it was before, adding that according to police notes, Weddell took it off while he was inside Korchinski-Paquet's unit. 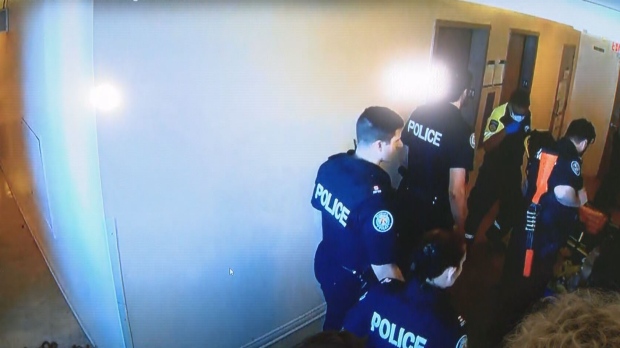 "And so, essentially, our position is that the information that was excluded from Mr. Martino's report was woefully inaccurate and misleading and provided no reasonable explanation of how and why Miss Korchinski-Paquet found herself on the balcony at the time," Bogle said. In the statement of claim, he stated that the presence of Weddell's weapon and the failure of the officers’ de-escalation tactics contributed to her death.

Bogle also accused Weddell and the other officers of conspiring "to create a narrative that was inaccurate" to deceive the family and the public.

"Through the intentional creation of the misleading, inaccurate facts, the (Korchinski-Paquet's family) have suffered severe emotional distress as a direct result of the extreme and outrageous conduct of the defendant officers," Bogle stated in the claim.

Bogle added that the SIU report also did not align with the information he received from a civilian, who was not questioned by the police watchdog.

He claimed that the civilian was on a video call with Korchinski-Paquet for 20 seconds shortly after she and the officers returned to the apartment unit.

"The witness noted that the phone call was terminated and that her additional attempts to re-establish connections were terminated on Ms. Korchinski-Paquet's cellphone. All attempts to reconnect to the call and find the phone have basically failed," Bogle said.

He added that her phone was not secured as part of the SIU investigation.

In a statement to CP24, a spokesperson for the SIU confirmed that it received a notice of the action.

"The Unit has no comment about matters that are before the court other than to say that it stands by the integrity of its investigation," the spokesperson said.

The family is suing the city and TCHC for allegedly failing to erect a fence on Korchinski-Paquet's balcony despite several requests.

Bogle said Korchinski-Paquet and her mother asked TCHC over the years to install safety fencing, but those requests "had gone unsatisfied and ignored."

"The City of Toronto has had a long history and understanding the TCHC has been derelict in their responsibilities in terms of responding to requests of residents to maintain their properties," Bogle added.

Bogle said he has also filed an application for judicial review of the Office of the Independent Police Review Director's (OIPRD) decision not to lay any charges against the Toronto police officers.

The OIRPD is a civilian-run agency which manages all public complaints about police in the province.

The family filed a complaint to the OIRPD on Nov. 2020, and the agency released its findings on Sept. 2021.

Bogle said the OIRPD's findings "fell below their standards." He noted that a judicial review is scheduled in October.

Regis Korchinski-Paquet is shown in an undated handout photo provided by her family's lawyer. (THE CANADIAN PRESS/HO-Ma'at Legal Services)