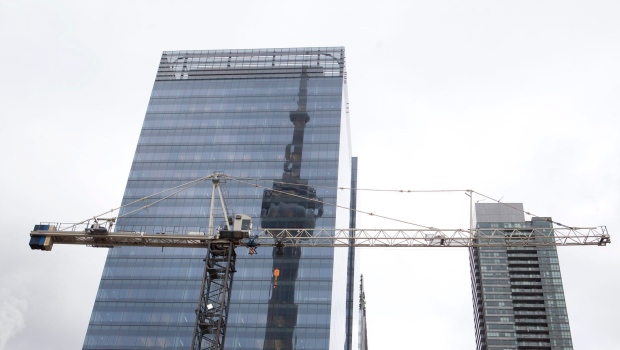 The CN tower is reflected in a high rise building behind a construction crane in downtown Toronto on February 4, 2012. THE CANADIAN PRESS/Pawel Dwulit

TORONTO -- Matthew Boukall remembers a couple of years back at a conference in Calgary, where someone got confused over the difference between condo and rental apartment builds.

"People had only seen condo apartments for so long, that they forgot people built rental," said Boukall, a vice-president at real estate services firm Altus Group.

Decades of under-investment made dedicated rental buildings an afterthought for many, but the industry has been quietly gathering momentum and attracting deep-pocketed investors.

Some 72,000 rental units were under construction across the country in the last quarter according to Canada Mortgage and Housing Corp. That's up by more than 12,500 from a year ago, double the level of five years ago, and almost five times the number that were being built a decade ago.

The recent growth -- propelled by a combination of a rising population, increasingly out of reach home ownership and a lack of rental supply -- has come about gradually enough that many haven't noticed, said Boukall.

"It's come along slowly, where I don't think it has shown up on a lot of people's radar."

The market, however, is now booming, with record investment of $8.3 billion last year according to real estate firm CBRE, while PwC said in its latest real estate outlook that the sector's landscape is "stronger than it has been at any other time in history."

The resurgence in dedicated rental buildings is important because they provide more stability for renters than individual condo rentals, which owners can take off the market with little notice, while many cities are desperate for new rental stock to address extremely low vacancy rates.

The low vacancy rates, which are under one per cent in Toronto and Vancouver, have pushed rents up in major cities, helping to attract more institutional and private equity investors who like the improving returns on rentals as well as the long-term cash flows they provide.

Rental builds also provide diversification for big developers, like RioCan and Oxford Properties, which have been looking to make better use of the sprawling footprint of their mall parking lots and retail spaces.

Oxford started to push into the rental space a decade ago, and says it now sees the increased demand for rentals as a permanent shift.

"With demographic changes, and lifestyle changes, we just think that that's structural, that more people, or an increasing part of the population, is going to choose to rent over owning a home," said Tyler Seaman, head of multi-residential for North America at Oxford.

Oxford, the real estate investment arm of the Ontario municipal pension fund, started into rentals by buying existing stock, but steadily rising prices for buildings and general lack of supply have pushed it and others into building more of their own.

"Development is going to be an increasingly important part of our program," said Seaman.

By building new, developers can add the amenities and build quality renters have come to expect after renting in condo developments, he said.

To make the economics work, many developers are relying on rental rates at the higher end of the spectrum, but Seaman said Oxford also plans to build mid-market rentals as it expands rentals from about six per cent of its portfolio to somewhere between 10 and 20 per cent.

Developers are also seeing the value of holding on to increasingly scarce land in big cities.

At a real estate panel in early October, Dream Unlimited chief financial officer Pauline Alimchandani said the company was shifting from condo to rental developments to preserve their land base in Toronto.

"Pretty much almost all of it, we're planning on building and owning for the long term. That is a big shift from where we were when we went public just a few years ago."

Condo builds, however, still dominate in Toronto and Vancouver, in part because high land costs make the quick payout of condo buildings more attractive, and because condo developers already control so much of the land base, said Boukall at Altus.

In Toronto there were about 7,800 rental units under construction in September, compared with 56,000 condo units. In Vancouver, where a softer condo market has pushed some developers to shift to rentals, there were 9,300 rentals to 31,400 condos. Montreal had 14,700 rentals under development compared with 10,500 condos.

The boom in rentals could go a long way to addressing low vacancy rates in many cities, but is still far off what's needed to offset a rising population for Toronto. A recent RBC report determined that Toronto would have to build an average of 26,800 units per year to bring vacancy rates up to a healthy three per cent over, while build rates in other cities look like they could address gaps in a couple years.