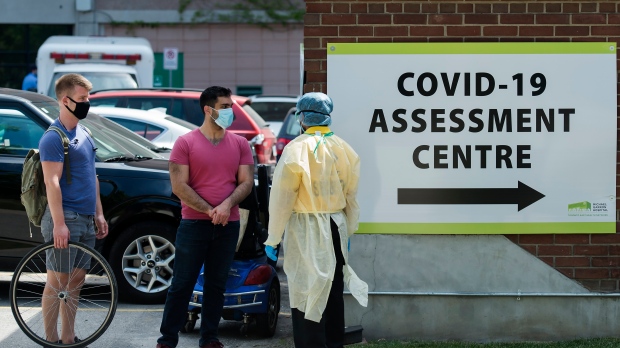 Ontario’s associate chief medical officer of health says a report indicating that more than 10 per cent of COVID-19 tests are coming back positive in a number of Toronto neighbourhoods is “very concerning” and the province will work to bring numbers down in those regions.

On Monday, the Toronto Star reported that new provincial data, which was recently obtained by the newspaper and has not been made public, found that four areas of Toronto are seeing positivity rates above 10 per cent and two-thirds of the city has a test positivity rate of higher than three per cent, the benchmark set by Toronto Public Health (TPH).

“I haven’t actually seen the data myself. I’ve read the article in the paper. That is very concerning,” Dr. Barbara Yaffe, Ontario’s associate chief medical officer of health, said at Queen’s Park on Tuesday.

“Those rates are high and those are neighbourhoods and areas that we already knew were at increased risk based on other data.”

According to The Star, four areas with positivity rates of more than 10 per cent include Weston and Finch, Sheppard and Jane, Lawrence and Keele and an area northeast of Yonge and Eglinton.

Several other neighbourhoods are seeing positivity rates of over seven per cent, the Star reports, including areas near Morningside Heights, Kennedy and Eglinton, Ellesmere and Bellamy, Trinity-Bellwoods, Church-Wellesley, and St. James Town-Cabbagetown.

The associate medical officer of health in Toronto, Dr. Vinita Dubey, said public health officials have been receiving “preliminary data” highlighting the positivity rate by neighbourhood but noted that “the data have not yet been validated and have not been included in public reporting.”

She added that public health officials are working with community partners in areas with higher rates of infection to boost testing and put prevention measures in place.

The City of Toronto’s COVID-19 dashboard currently indicates that the per cent positivity rate in the city is at 2.5 per cent but that is based on data from the week of Sept. 20.

At his daily COVID-19 briefing at Queen’s Park on Tuesday, Premier Doug Ford told reporters that he saw the story earlier in the day.

“It is in certain areas, and one being in my area, and that’s where we have to focus on. We go out there, we put the mobile testing units up, we get more advertising within those communities,” he said.

Toronto continues to lead the province in the number of new cases reported each day, with more than 200 additional infections confirmed on Tuesday.

New infections in Toronto represented nearly half of the 615 cases reported in Ontario on Monday, according to centrally collected data.

Yaffe said the province will continue to work with local public health officials to curb the spread within Toronto communities at a higher risk of infection.

“In addition to all the education, social marketing, and so on, and working with the ethnic media, I think the case follow up there has to be prioritized,” she said.

“I know that Toronto Public Health has cut back on contact management, but perhaps in those areas, that is an area where it should be prioritized as well as the long-term care facilities and other congregate settings because we have to determine where these people are getting their infections.”

Last week, Toronto Public Health confirmed that with the exception of cases in congregate settings, such as schools and long-term care facilities, public health is no longer notifying close contacts of confirmed cases about a potential risk of exposure due to the surge in new infections in the city.

This weekend, the Ford government confirmed that an additional 200 staff would be sent to Toronto to help with case and contact management.

“I think there are extra strategies that can be and are being implemented and need to be strengthened and we will continue to work with public health on those,” Yaffe said in response to the high positivity rates.

The information comes as Ford continues to dismiss the idea that further restrictions are needed for bars and restaurants in the city.

For the second day in a row, Ford told reporters that he is unconvinced that this step is necessary based on the data he has seen so far.

“We just have to protect the small mom and pop restaurants. There are tens of thousands of people that work for these small businesses too and I’m not about to see someone lose their livelihood, and just destroy, when I say destroy, destroy their lives,” Ford said.

Ontario Premier Doug Ford holds a press conference with his medical team regarding new restrictions at Queen's Park during the COVID-19 pandemic in Toronto on Friday, October 2, 2020. THE CANADIAN PRESS/Nathan Denette