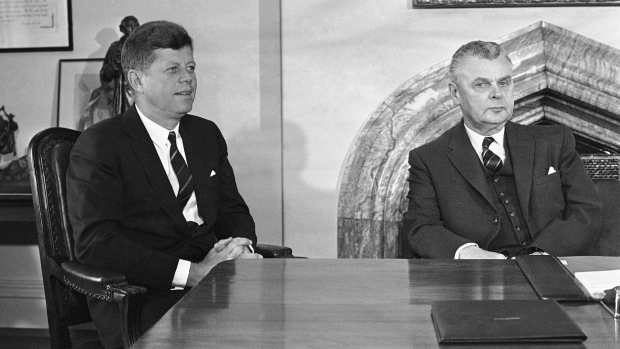 In this May 17, 1961 file photo, U.S. President John Kennedy and Prime Minister John Diefenbaker meet to begin talks on U.S. and Canadian problems in Ottawa, Canada. The prime minister's bureaucrats are hoarding a trove of decades-old records that chronicle Canada's Cold War intelligence history, say security researchers who are pushing to make the files publicly accessible. THE CANADIAN PRESS/AP Photo

They're puzzled as to why the Privy Council Office has not handed the extensive collection - which touches on everything from Iron Curtain defectors to possible Soviet invasion - to Library and Archives Canada for preservation and public release.

“I think Canadians have a right to understand their history,” said Alan Barnes, a senior fellow at the Centre for Security, Intelligence and Defence Studies at Carleton University's Norman Paterson School of International Affairs. “To allow the government to hide this history away for their own convenience, it defeats the whole purpose of having an archival system.”

Barnes cites the importance of government transparency in urging people to sign an online parliamentary petition to the prime minister aimed at ensuring people will be able to see the documents.

He became aware of the records while serving in the Privy Council Office's intelligence-assessment secretariat, where he worked from 1993 until his retirement in 2011.

The records were invaluable to historian Wesley Wark when he was asked in the late 1990s to write a classified history of the Canadian intelligence system in the decades following the Second World War.

A draft of the book-length study was disclosed through the Access to Information Act in 2005, though considerable portions - including an entire chapter - were deemed too sensitive to release.

The study revealed that Ottawa accepted some 30 defectors from Soviet and Communist Bloc diplomatic and consular missions between 1945 and 1952, and that Canadian spies secretly analyzed Soviet movies during the Cold War in the hope of gleaning useful intelligence.

Barnes has recently made requests under the federal access law for various records in the Privy Council archive, but has largely been met with delays and denials, prompting him to lodge complaints with the information commissioner.

Many of the old paper documents are of great historical significance but have not been preserved or handled properly, said Wark, who teaches at the University of Ottawa. “They sit moldering away.”

The Privy Council Office was never meant to serve as a perpetual archive of important documents and none of these records has “any conceivable contemporary operational use,” Wark said. “But PCO has guarded them as a fortress and constructed impenetrable walls to any researcher brave enough to tackle Canada's access legislation.”

Privy Council Office spokesman Stephane Shank said the agency is reviewing records to ensure classified information is not improperly released before transferring them to Library and Archives.

The review includes more than 8,000 pages of minutes and other documents related to federal cabinet papers, including some documents from the security archive, Shank added. However, he did not say what would become of the many remaining intelligence records in the archive.

The petition, which can be found at https://petitions.ourcommons.ca/en/Petition/Details?Petition

e-2025, has been signed by over 200 people. It requires 500 signatures by June 11 to receive certification for presentation to the House of Commons.


“The petition offers the right solution,” Wark said. “PCO must let go its iron grip on these records and transfer them to Library and Archives Canada where they can be properly preserved, indexed and made available to future generations of researchers.”