An event held in the city’s west end Sunday afternoon was about celebrating the positives in a community recently threatened by gun violence, according to the head of the Toronto Community Housing Corporation.

“Let’s make something positive with all the negative stuff, because there are a lot of positive things,” TCHC president and CEO Gene Jones said at the barbecue at the Swansea Mews housing complex, located in the Windermere Avenue and The Queensway area, Sunday afternoon.

“We owe it to these kids and to our residents,” Jones said of the event. “We want to be good partners, that’s why we’re all here celebrating.”

Sunday’s event follows a number of recent incidents of gun violence that have occurred at the housing complex, as well as on other TCHC properties.

On Friday, 16-year-old O’She Doyles-Whyte and Kwame Duodu, 15, were shot and killed at a housing complex on Grandravine Drive, in the Jane Street and Finch Avenue West area.

Police continue to search for three male suspects last seen on bicycles in connection with the shooting.

Jones, who said he would be in the neighbourhood this week, stressed the importance of residents coming forward and providing any information they may have to police.

“Those murderers, those cowards are still on the street,” he said.

Double shooting earlier in the day

Sunday afternoon’s barbecue comes just hours after a double shooting in the community.

It happened outside a parking garage at around 4 a.m.

According to police, both victims suffered non-life-threatening injuries and transported themselves to hospital.

One of the victims has since been treated and released.

No arrests have been made.

Earlier this month, 26-year-old Christopher Kotsopoulos was shot and killed in a daytime altercation outside the housing complex at around 5 p.m. on Aug. 5.

The shooting was witnessed by children.

Three suspects have been arrested and charged with second-degree murder in connection with the shooting.

Police are still trying to identify a fourth and fifth man involved. 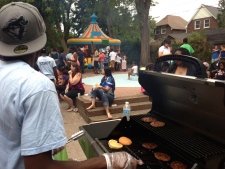