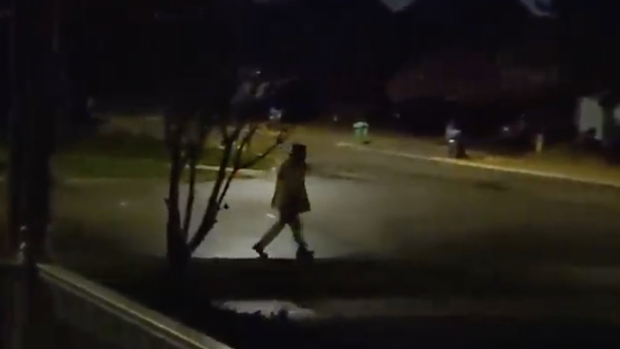 Residents in a Mississauga neighbourhood say they are frightened and looking for answers after months of a “night prowler” keeping them up at night.

Mississauga resident Joseph Seli told CTV News Toronto on Monday that a “night prowler” has been frequenting his neighbourhood in the middle of the night, walking up and down Dovetail Mews and McMaster Road, yelling and screaming loudly.

The first time Seli said he encountered the man was in late August. He said the most recent encounter was in the early hours on Monday morning.

“He comes to up to three times in an evening, once or twice a week,” Seli said.

“He’s chanting the same thing over and over again — that something's going to happen in five hours,” he said.

Seli said he was able to brush it off at first, thinking it could be partiers, but the disturbance is now starting to take a toll on his daughter’s wellbeing.

“It’s definitely very unsettling and I have an eight-year-old daughter who’s frightened,” he said. “My daughter not to be able to get back to sleep on a school night is becoming a major problem.”

Despite Seli reporting the incident to the Peel police on numerous occasions, the man has yet to be apprehended.

Peel Regional Police confirmed to CTV News Toronto that they have responded to reports of a male walking up and down Dovetail Mews “yelling and screaming” three times in the last few months.

Seli said he’s at a loss for what to do.

“I keep telling the officers [that] this can't continue,” he said. “I'm not going put up with this.”

“It has to stop — I have an eight-year-old and her well-being is more important than anything for me.”

Police describe the male as 5’7” with a medium build, wearing an orange and red hooded sweatshirt, light-coloured jeans and black shoes.