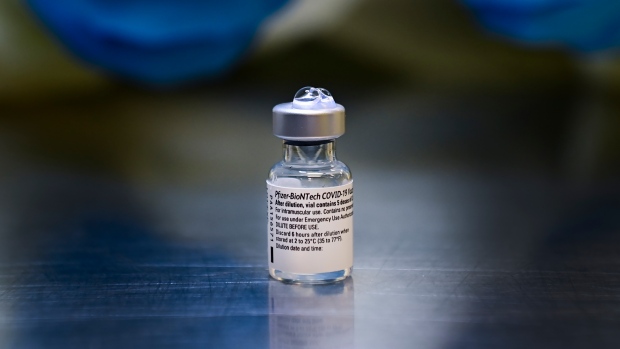 A dose of the Pfizer-BioNTech COVID-19 vaccine is seen in this file photo. THE CANADIAN PRESS/Nathan Denette

OTTAWA - Indigenous Services Canada gave residents of an Ontario First Nation 71 expired doses of the Pfizer vaccine for COVID-19 between Aug. 9 and Sept. 15.

According to a statement from the Saugeen First Nation, nurses from the federal department administered doses based on the expiry date on the vials, not realizing the doses had already expired because they were not refrigerated.

The First Nation says the shipment was received in July and was originally set to expire in October.

But because the vials were thawed, they were good for only 31 days - until Aug. 9. The new expiry date was noted on the box but not on the individual vials, in accordance with Indigenous Services protocol.

While the expired doses don't pose a health risk, the Saugeen First Nation COVID-19 response team said the mistake could affect the livelihood of some residents while they await another dose.

In a brief statement during a teleconference with reporters, Indigenous Services' chief medical officer said the government is working with public health officials in Ontario to figure out when to administer the new doses.

Now health workers need to assess each person's situation and their medical conditions to determine when they should be revaccinated, chief medical officer Dr. Tom Wong explained.

So far there has been at least an attempt to contact each person affected, he said.

Wong would not answer follow-up questions and said more information would be available next week.

In a statement issued later Friday, Indigenous Services Canada said it “recognizes the significant concern that this may cause to the community, and takes responsibility for the circumstances that led to this inadvertent situation. ISC has taken action to ensure this remains an isolated incident, including revised immunization protocols, enhanced training and vaccine education for nurses, and updating the COVID-19 medical directive.”

Dr. Theresa Tam, Canada's chief public health officer, did not have direct knowledge of the incident but said any undertaking as massive as Canada's vaccine rollout is bound to encounter issues.

Still, she encouraged members of the community and Indigenous Services to sit down together and discuss what went wrong.

“It's true that sometimes these incidences do lead to a lack of trust, which is already very difficult to build,” Tam said at a press briefing Friday. “I think everyone should come to the table with an open mind to look for prevention measures for the next time.”

This report by The Canadian Press was first published Sept. 24, 2021.