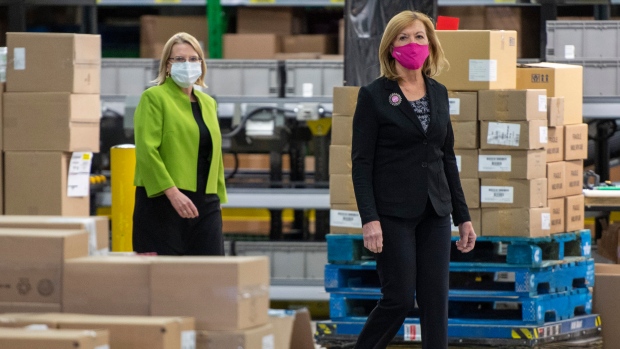 TORONTO - A coalition of about 50 retailers is calling on the Ontario government to lift COVID-19 restrictions for non-essential stores it claims is making things worse.

In an open letter to Premier Doug Ford and Health Minister Christine Elliott, the retailers argue that shutting down Toronto and Peel Region to restrict the virus's spread hasn't reduced the number of shoppers.

The retailers say the current policy pushes more consumers to big-box and discount stores that remain open after being deemed essential, while thousands of small, independent and local stores are closed despite selling many of the same products.

They say they have been forced to lay off workers instead of employing thousands of temporary people to handle the holiday sales rush.

The business leaders are calling on the government to immediately open all retail stores in the province and impose a 25 per cent capacity limit on non-essential stores in lockdown regions.

“Large and small retailers need each other to create a vibrant retail ecosystem,” said the letter signed by the heads of companies including Hudson's Bay, Canadian Tire, Birks and Ikea.

“Collectively, we are asking that you join with us in common cause and a shared commitment to keeping Ontario families safe and secure through this extraordinarily challenging period.”

The provincial government responded by noting the restrictions are aimed at limiting the spread of COVID-19 to protect the health and well-being of Ontarians.

Alexandra Hilkene, a spokeswoman for deputy premier Christine Elliott, said the government must limit opportunities for individuals to have close contact with others to help stop the spread of the virus.

This includes allowing box stores to operate at half capacity.

“These necessary measures are being taken to limit community transmission of COVID-19 in order to keep schools open, safeguard health system capacity, and protect the province's most vulnerable populations,” Hilkene wrote in an email Tuesday.

“To be clear, moving regions into a lockdown is not a measure this government takes lightly. However, as we have seen around the world, lockdowns are a difficult but necessary step to stop the spread, safeguard the key services we rely on and protect our health system capacity.”

She noted that the Ontario government is now providing $600 million in relief to support eligible businesses required to close or significantly restrict services due to enhanced public health measures.

Companies in this story: (TSX:CTC.A)