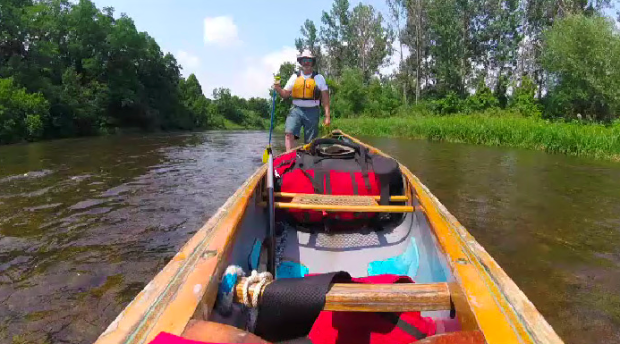 An Ontario couple is canoeing from Georgetown to Perth towards their new home.

What should have been a roughly four-hour drive for two retired teachers to their new home in Perth, Ont. has turned into a four-week canoeing adventure.

Former Georgetown residents Leslie Hoyle and Bell Elgie packed all of their belongings into boxes and shipped them to their new home in Perth. But instead of travelling along with the movers, they decided to take the scenic route—a 500-kilometre canoe and portage.

“We are life-long canoe paddlers,” Hoyle said. “We thought we would have a carbon-neutral long holiday and get to know southern Ontario.”

Hoyle and Elgie lived in their Georgetown home for 22 years and said there was a relatively straight path along Ontario’s waterways to their new home. The choice to paddle there seemed “fun and fitting for two outdoor educators as they retired.”

“Both of us found just getting ready to move very stressful, you know leaving the place where you’ve lived and worked for so long,” Elgie said. “As we got into the canoes we were both very emotional and stressed and tired. At the end of the first day, it was like a weight had been lifted off our shoulders.”

“When you are on the water all the cares and everything else that’s in your life disappears and all that you worry about is what’s around the bend.”

With the rest of their furniture packed up, the couple is travelling light. Hoyle said they have a pack with all their gear, including a tent, tarp, sleeping bag, and some clothing, as well as some dehydrated and freeze dried food. They also have a pot set and a small stove.

Hoyle and Elgie began their journey on July 28 and have been chronicling their adventures on social media. On Day 4, they arrived in Toronto.

They paddled six hours one day and four another, adding that they are setting modest goals in case of bad weather. They also expect to make a numerous stops along the way.

“We found two campgrounds close to the water,” Elgie said. “We’ve got a couple places we can stay with friends, so trying to plan days that are reasonably lengthy but also, you know there’s a place where you can stay that night on Lake Ontario is tricky.”

They will also be celebrating their 31st anniversary on the water.

“We booked a bed and breakfast in Trenton,” Elgie said. “After a few days camping out it will be a way to clean up.”

Their plan is to spend the time exploring the province, reminiscing and thinking about the future—what they want to do with their retirement once they reach Perth.

But they will have to unload all their boxes first.