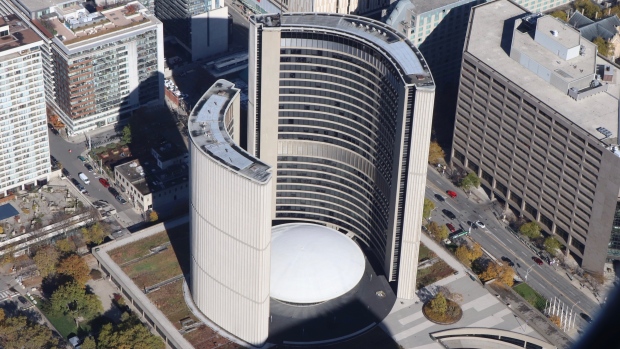 The Toronto City Hall is seen in this undated photo. (CP24 Chopper/Ted Brooks)

Tens of thousands of civil servants are once again being told to work remotely amid concerns about the Omicron variant.

Both the Ontario Public Service and the City of Toronto were planning for a broader return to the office in the New Year but on Monday both announced separately that those plans are being put on hold due to the rapid rise in COVID-19 case counts.

The news means that approximately 30,000 OPS employees, who began a gradual return to their office at the beginning of November, will be back working remotely full-time by the end of the week.

Meanwhile, the City of Toronto says that its plans to have employees return to the office part-time as of Jan. 4 will be put on hold in the wake of new advice from Chief Medical Officer of Health Dr. Kieran Moore.

That decision will affect approximately 10,000 additional civil servants, or about 25 per cent of the city’s overall workforce.

“Given the new provincial advice, the city manager has advised employees who are able to work remotely to continue to do so until the public health advice changes. I remain as committed as ever to Toronto’s recovery from this pandemic, and to continuing to adhere to public health advice – particularly at this time with the new Omicron variant – will help us do so and ensure that Toronto comes back stronger than ever,” Mayor John Tory said in a press release announcing the change in plans.

Tory had stood by the city’s plans for a broader return to the office as recently as last week, telling reporters that he hoped it would be an “important signal to other workplaces in both the private and public sectors that we can safely return and reinvigorate the economy.”

But since then the fourth wave of the pandemic has quickly worsened with cases involving the Omicron variant now doubling every three days.

Moore also said on Friday that employers need to be “vigilant” and should be asking their employees to work remotely “wherever possible.”

“The city continues to demonstrate that the health and safety of employees and the public are the highest priorities and that all decisions are based on science and evidence. The city’s office staff have been incredibly productive and shown great ingenuity while working remotely, and I know that will continue. I look forward to welcoming staff back to offices when it is safe to do so,” City Manager Chris Murray said in the press release issued on Monday afternoon.

In a memo sent to its members and obtained by CTV News Toronto, one of the OPS’s largest unions, AMAPCEO, said that it has been informed that the province is “pausing” the return to work plan until February 7 “at the earliest.”

It remains unclear whether other large employers in the city that were planning broader returns will follow suit. The Bank of Nova Scotia was planning a phased return to office for employees in its headquarters starting Jan. 17.