Rise in hospitalizations similar to 'early days' of pandemic, head of UHN warns 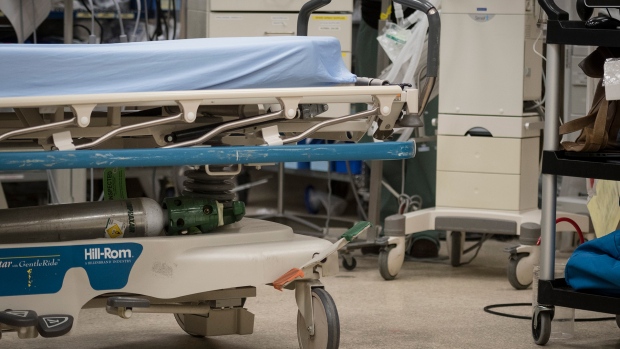 The trauma bay is photographed during simulation training at St. Michael's Hospital in Toronto on Tuesday, August 13, 2019. THE CANADIAN PRESS/ Tijana Martin

The head of the university Health Network is expressing concern about a rise in hospitalizations related to COVID-19 that he says is starting to remind him of “the early days” of the first wave of the virus.

University Health Network President and CEO Dr. Kevin Smith tells CP24 that the number of COVID-19 patients receiving treatment in his hospital network had went down to zero for several weeks but is now back up to seven with the majority of those people in intensive care.

The uptick in hospitalizations within the UHN mirrors the trend being seen in other hard-hit regions as well.

At one point in August there were only 35 people being treated for COVID-19 in Ontario hospitals but that number has slowly inched up since then.

On Monday a count of data from hospitals and Ontario's 34 local public health units indicated there were at least 77 people in hospital for treatment of COVID-19 symptoms. That number is higher than the 47 hospitalizations reported by the Ministry of Health, a discrepancy likely explained by a lag in reporting and differences in definitions of what constitutes a COVID-19 patient.

“When we saw the number of tested cases positive going up I wasn’t overly concerned because our testing number has been at about 30,000 a day but when I began seeing us move away from a very small number of cases at UHN into first two inpatients, then four, then five and then seven with a number of those being in our intensive care units it felt a little bit like the early days of wave one,” Smith told CP24 on Monday. “I really want to shout out that we know how to end this growth. It is through very simple means – masking properly, handwashing physical distancing and avoiding large social situations which as we have seen have unfortunately picked up and have resulted in some significant transmission of disease.”

The number of hospitalizations related to COVID-19 surpassed 1,000 in April and hovered around that mark for several weeks before starting to decline.

For months there were fewer and fewer people receiving treatment for COVID-19 in Ontario hospitals but that steady decline has now stopped amid a recent rise in cases.

Speaking with CP24, Smith said that he believes that the healthcare sector is “much better prepared” for a potential second wave of the virus thanks, in part, to a more robust supply of personal protective equipment but he said that he is still concerned about hospitals being overwhelmed should cases spike again.

“The good news as I see it is that it sound like we are not terribly far away from one or a number of effective vaccines assuming Phase 3 clinical trials bear the fruit we hope they will and if that is the case we really are are just asking people to stay the course while we get to that important outcome and really preserve and protect the wellbeing of people not only who may be exposed to COVID but others in our society whose care could be interrupted if our healthcare system is overwhelmed by COVID,” he said.

OHA warns that progress may be ‘slipping away’

The concerns raised by Smith on Monday come as the province reports 313 new cases of COVID-19, its highest daily count since June 5, with total active cases in the province now above 2,000.

It also comes with the Ontario Hospital Association warning that the province’s “hard-won progress is slipping away” when it comes to limiting the spread of the virus.

In a news release issued earlier on Monday, President and CEO Anthony Dale said that transmission of COVID-19 is clearly “accelerating” and that it is now everyone’s responsibility “to take steps immediately to halt this alarming trend.”

Dale said that while some people have likely been “lulled into a false sense of security by lower cases counts and the re-opening of the economy,” they must remember that COVID-19 is “still a very real threat” that could overwhelm hospitals once again.

“Without continued vigilance, today’s isolated outbreaks in Toronto, Peel, York and Ottawa could easily spread throughout communities right across Ontario,” he warns in the release. “If current trends continue to accelerate, economic restrictions may tighten once more, and the school year for our children will be in jeopardy.”