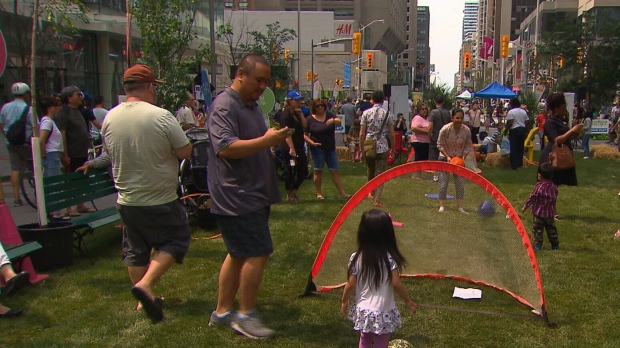 Drivers, commuters, and pedestrians can expect a number of road closures across the city for scheduled events this weekend.

Here is what is on:

The event, which will be held on Bloor Street West between Jane Street and Runnymede Road, starts at 5 p.m. on Friday and runs until 7 p.m. on Sunday.

Hundreds of thousands of people are expected to attend the three-day event, according to organizers.

Road closures will be in place starting on Friday at 9 a.m. until midnight on Sunday.

The closure on Bloor Street West will extend from Runnymede Road to High Park Avenue for the parade on Saturday from approximately 11 a.m. until noon.

Three will be some adjustments to TTC service in the area.

The festival will take place from 11 a.m. to 7 p.m. on Saturday and Sunday. The accommodate the event, Roncesvalles Avenue will be closed from Grafton Avenue to Boustead Avenue from 5 a.m. on Saturday until 11:59 p.m. on Sunday.

RBC Fun for the Kids

The race, which will host both a 5-kilometre run and a 10-kilometre run, will begin at 8 a.m. on Saturday and end in the area of Mel Lastman Square.

Open Streets Toronto will be held on Sunday between 10 a.m. and 2 p.m.

For the event, Bloor Street will be closed between Ossington Avenue and Church Street. Yonge Street will also be shut down between Davenport Avenue and Queen Street. Significant delays are expected as a result of the closures. The closures will run from 8:30 a.m. to 3 p.m.

Vehicles will be able to cross in the following areas: